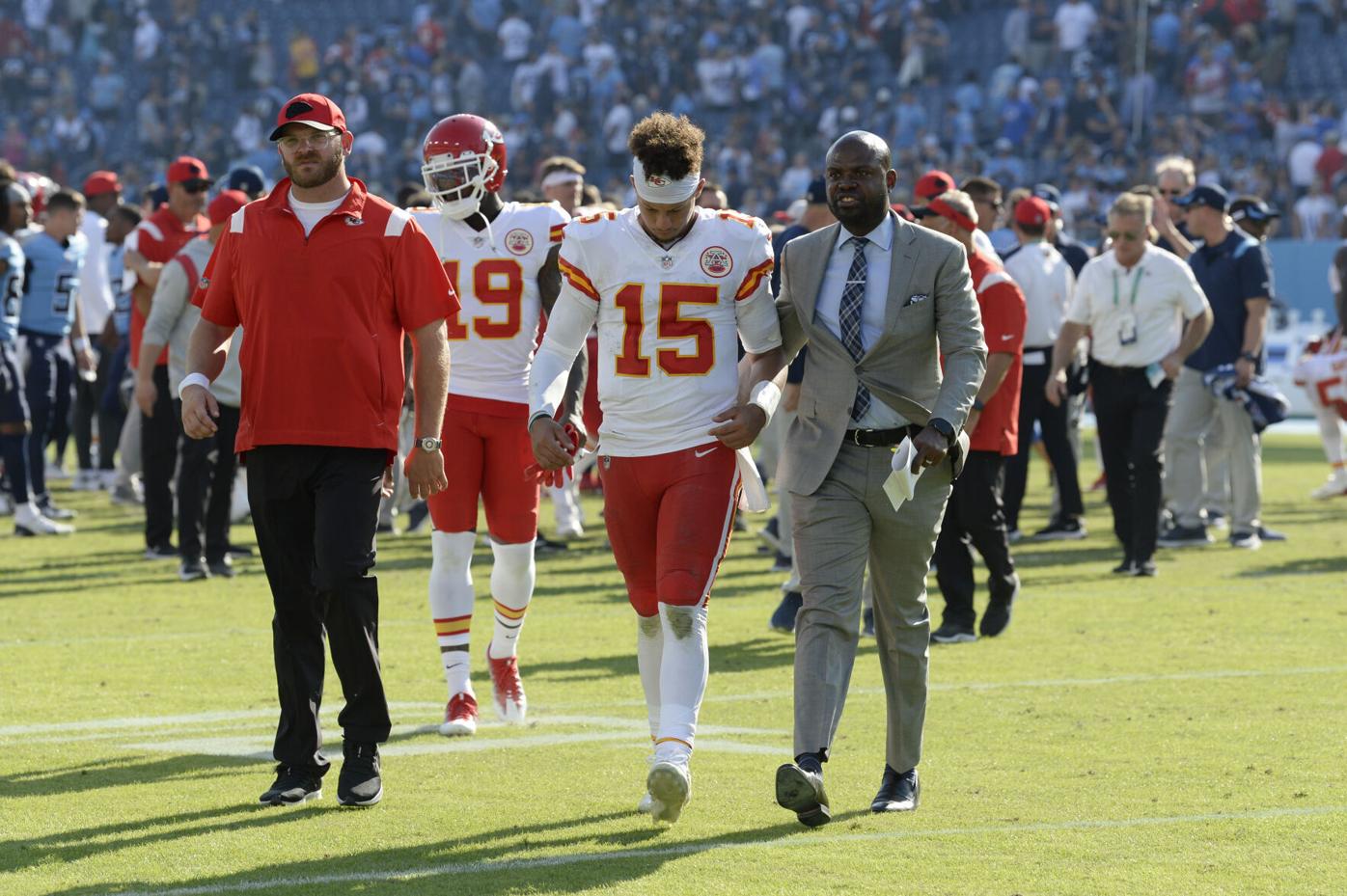 Chiefs quarterback Patrick Mahomes leaves the field Sunday after a loss to the Tennessee Titans in Nashville, Tenn. 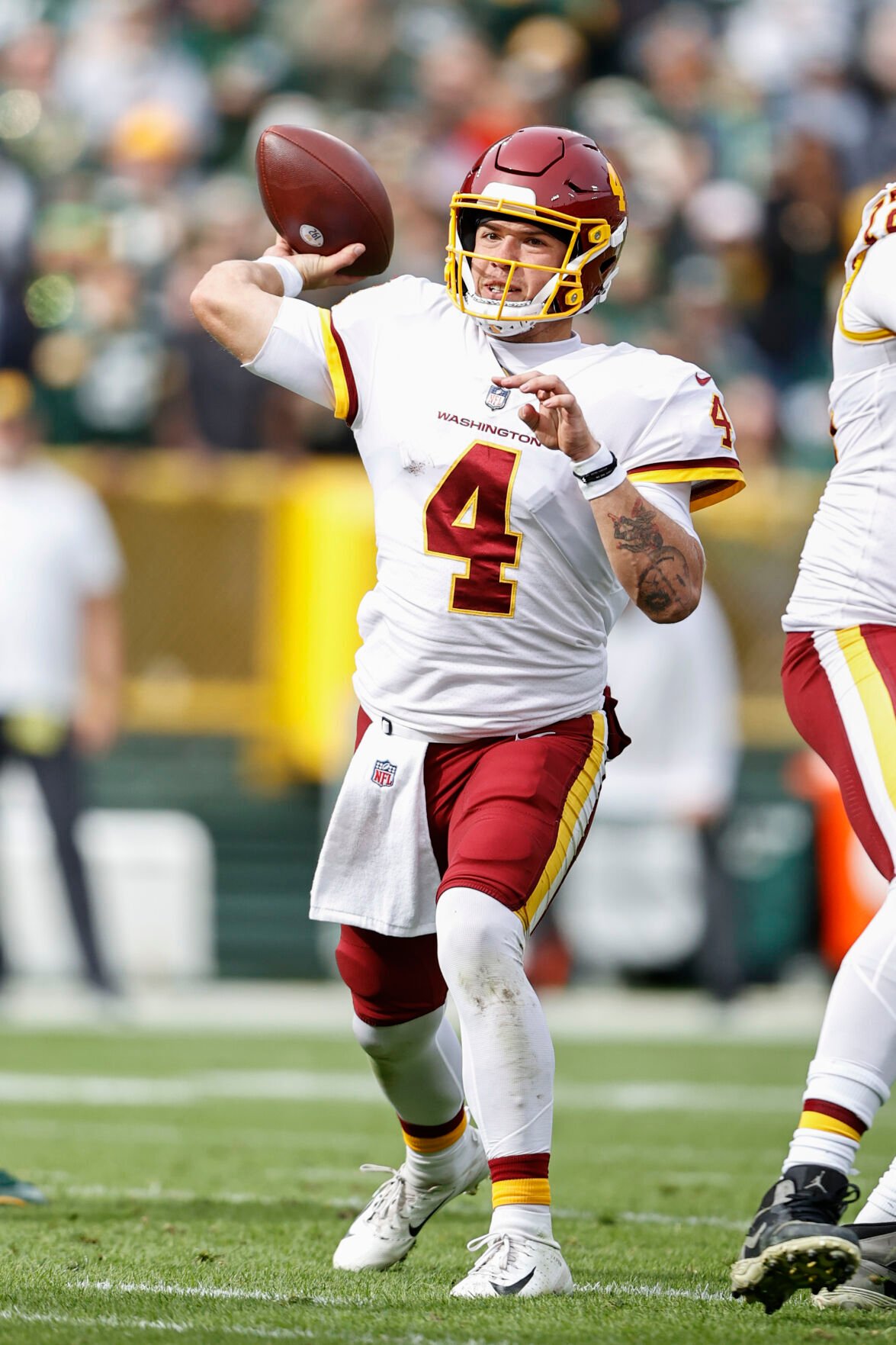 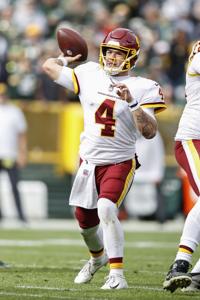 Washington Football Team quarterback Taylor Heinicke looks to pass the ball during the first half Sunday against the Packers in Green Bay, Wis.

Chiefs quarterback Patrick Mahomes leaves the field Sunday after a loss to the Tennessee Titans in Nashville, Tenn.

Washington Football Team quarterback Taylor Heinicke looks to pass the ball during the first half Sunday against the Packers in Green Bay, Wis.

DENVER — This was going to be a nice, relaxing Sunday.

Rake some leaves, watch the dogs crash through the leaves, rake the leaves again. Then enjoy an NFL afternoon without the Broncos. If the Broncos don’t play, the Broncos can’t lose.

Good news is, based on my football viewing, the Broncos (3-4) have a favorable schedule remaining. Turns out the Chiefs stink, and that’s two games. The Lions are still the Lions, and that’s one game. The Washington Football Team has lost three straight. That’s the next game, Sunday at Empower Field at Mile High when Peyton Manning goes into the Ring of Fame.

Woody Paige: The Broncos are bad, but this offseason could be worse

Bad news is, seeing these other teams shows how far behind the Broncos really are. They’re not close. They're far away. These other teams score a lot. Nine teams scored at least 27 points (not including the Sunday night game), which the Broncos have done only once in seven games. The Bengals scored 41 points. The Bucs scored 35 points — in the first half. The Raiders are cookin' and scored 33 points. The Patriots (who are not on Denver's schedule, mercifully) scored 54 points — with a rookie quarterback, Mac Jones, the Broncos passed on in the draft. That one will never make sense, not ever.

The Broncos scored 57 points over their last three games.

This Broncos-free Sunday revealed some stuff, mostly bad. The Broncos have 10 games against eight opponents left. The Chargers and Cowboys had a bye, so I didn’t watch them. They’re both fun to watch and score a lot — the Cowboys more than anyone else, 34 a game.

Sunday was supposed to be therapeutic. Instead, it was another reality check: if the Broncos don’t make successful changes to their offense, they will be gone for November, in for a long December. Maybe it’s a new offensive coordinator. Maybe it’s moving offensive line coach Mike Munchak to head coach, as I suggested after Denver’s most recent loss. Maybe it’s trying Drew Lock again. Maybe it's Avs season.

None are palatable choices. None are keeping up with the thoroughbreds I watched in the Bengals game on Sunday, or the Raiders game, or Denver’s last 11 games against the Chiefs.

Speaking of the Bengals, who are awesome, here were four games with future Broncos ties:

Woo, boy. Who dey. The Broncos have some time to figure things out till they get the Bengals, Dec. 19. Bengals rookie Ja’Marr Chase has 754 receiving yards, the most in NFL history through a player’s first seven games. Sheesh.

Deceptive score here. Washington comes to Denver on Sunday and had a bunch of chances to steal one at Lambeau Field: five scoreless trips inside Green Bay’s 30-yard line. The Broncos opened as four-point favorites vs. Washington. They can’t lose to the Raiders on Mike Shanahan Day, and lose to the Washington Football Team on Peyton Manning Day. Right?

ENGLEWOOD — Broncos coach Vic Fangio announced Friday he has no intentions of making any staff or personnel changes, despite four straight losses with the most recent one coming Thursday night against the Browns.