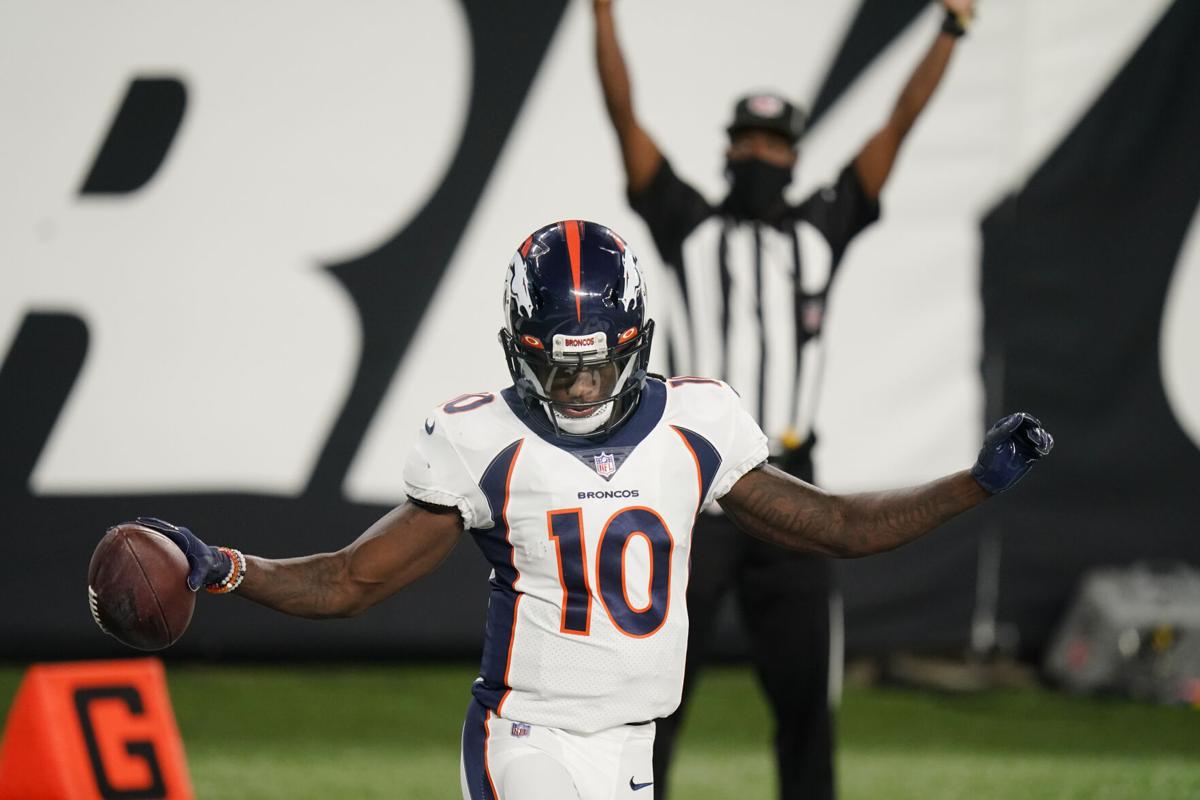 Broncos wide receiver Jerry Jeudy celebrates after scoring a touchdown during an Oct. 1 game against the New York Jets in East Rutherford, N.J. 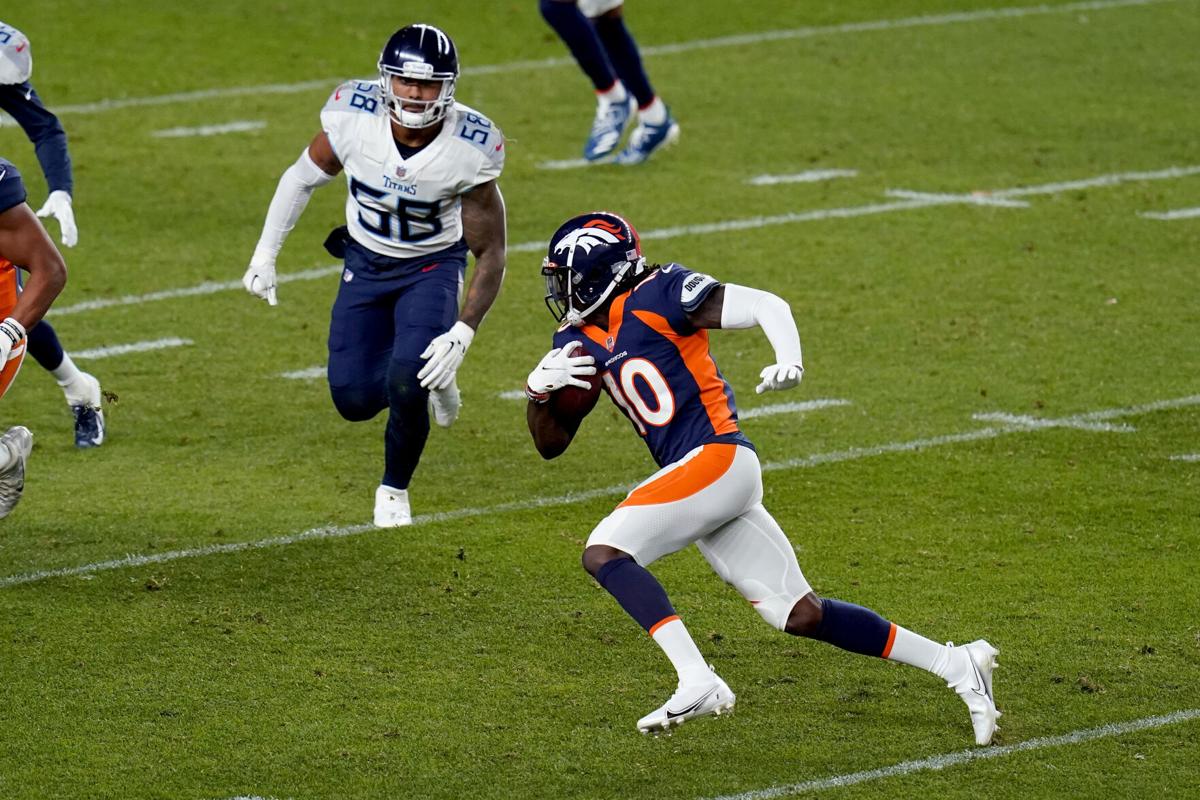 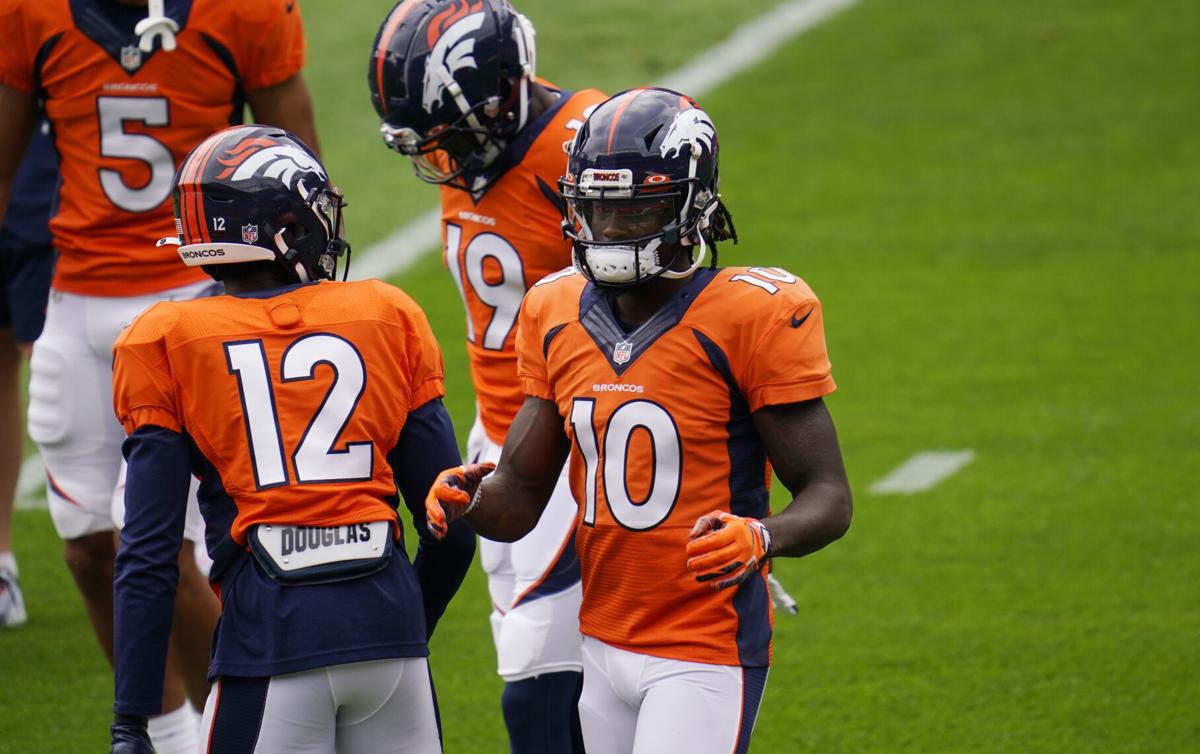 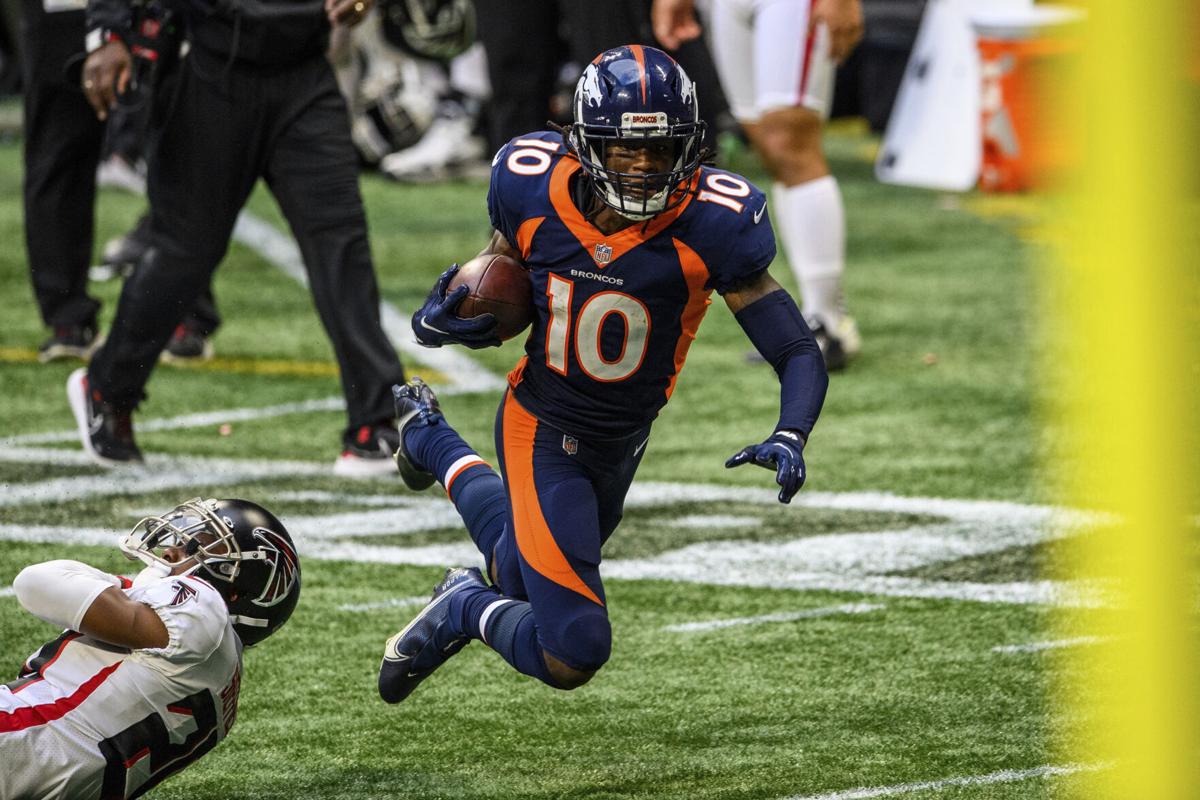 Broncos wide receiver Jerry Jeudy catches a pass as Falcons defensive back Kendall Sheffield defends during the second half Sunday in Atlanta. 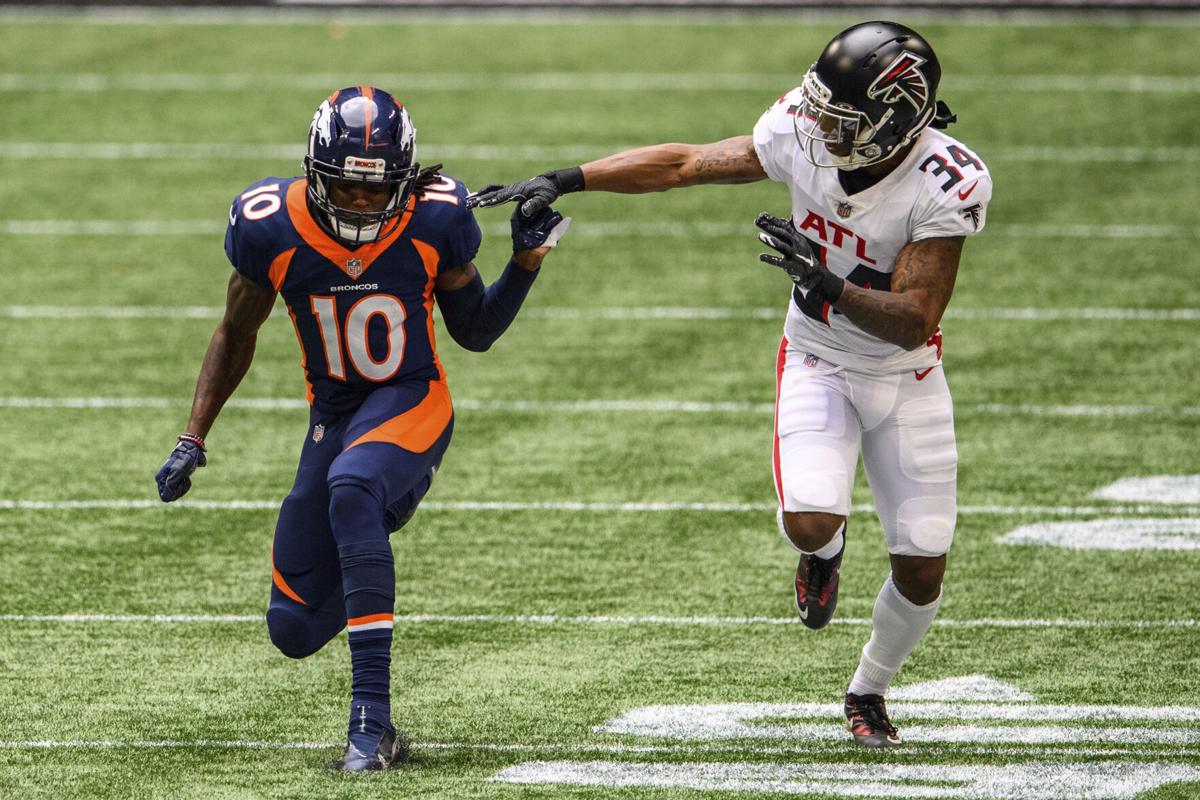 Broncos wide receiver Jerry Jeudy works against Atlanta defensive back Darqueze Dennard during the first half Nov. 8 in Atlanta.

Broncos wide receiver Jerry Jeudy celebrates after scoring a touchdown during an Oct. 1 game against the New York Jets in East Rutherford, N.J.

Broncos wide receiver Jerry Jeudy works against Atlanta defensive back Darqueze Dennard during the first half Nov. 8 in Atlanta.

When the Broncos drafted Jerry Jeudy 15th in the 2020 NFL draft, few were happier than Rod Smith.

The former Bronco great didn’t want Henry Ruggs III or CeeDee Lamb or Jalen Reagor or Justin Jefferson or Brandon Aiyuk. He didn’t want any of the receivers who went in the first round other than Jeudy.

Sure, they’re all great players and likely have bright futures — Smith admits that. But he saw something special in Jeudy.

“Jerry Jeudy had the best footwork and was the most ready-for-the-pros wide receiver I’ve seen,” said Smith, who played receiver for Denver from 1995-2006. “I just thought he was a guy that could easily come in and play. And after we drafted him, I watched him go through some cone drills on his Instagram page. That’s when I knew, if he could do that naturally right now, we just had to teach him the pro game.

“And if we can do that, he’ll tear the league up.”

After a slow start, Jeudy is hitting his stride for the Broncos. He’s totaled 34 receptions for 552 yards and two touchdowns this season, with nearly half of that production coming in the last three games. Against the Chargers, Falcons and Raiders, he caught a combined 15 passes for 266 yards and one touchdown. The 266 yards are the most among rookie receivers and sixth among all receivers in that span.

Jeudy, 21, has offered a glimpse into the future and a bright spot for the 3-6 Broncos. He’s given Broncos Country hope, while simultaneously mesmerizing the league with his elite route running, something he’s done his entire career.

He did it in high school at Deerfield Beach, Fla., where he was ranked the No. 1 wide receiver in the country.

In college at Alabama, where he won the The Biletnikoff Award, given to the nation's top receiver, his sophomore season.

“He’s a phenomenal talent,” said Brandon White, who trains Jeudy in the offseason. “One of those generational talents, especially when it comes to route-running.”

A few clips that show why Jerry Jeudy was among the best route runners at Alabama. pic.twitter.com/33xYY4w9QQ

And now in the NFL, where he hopes to become the next great Broncos wide receiver.

“I like everything I’ve seen out of him,” said Ed McCaffrey, who played receiver for the Broncos from 1995-2003. “I’ve been told he’s a really hard worker and a student of the game, which will allow him to have consistent success over time in this league which is ultra-competitive.”

Often receivers enter the league with great athleticism and a single quality or trait that separates them from the rest. For Ruggs III, it was his speed. For Lamb, it was his hands.

But for Jeudy, who is sort of a jack-of-all-trades, it was his gifted route running — a rare skill to possess this early in one’s career.

“He’s got an excellent combination of the height and weight and speed and quickness and good hands,” McCaffrey said. “One thing, though, that probably separates him is his route running. I think he has an excellent ability to get in and out of cuts and create separation at the break point. It takes physical skill to be able to come in and out of your breaks — especially the breaks where you’re coming back at an acute angle where you have to stop, flip your hips and come back at a 45 degree angle or a more drastic angle.”

That ability to separate from defenders is not something that’s easily done, McCaffrey said. It’s something that takes an immense amount of work and studying. Route running, in many ways, is just as much mental as it is physical.

Few understand this better than White, one of the top wide receiver trainers in the country. White, who played receiver at Wisconsin from 2003-2007, founded the “Receiver Factory” in 2016 and has trained the likes of Buffalo’s Stefon Diggs, Cleveland’s Jarvis Landry, Seattle’s DK Metcalf, Tennessee’s A.J. Brown, among others.

White has been training Jeudy since high school and says he, along with those mentioned above, are a part of the “new breed” of receivers coming out. What he means by that is receivers, like Jeudy, are finding ways to gain a mental advantage.

“What separates Jerry Jeudy is that it’s obvious that he has this God-given talent to be able to have this cat-like agility — to really be able to get from point A to B and change direction. That’s different,” White said. “But what people don’t understand is that I think he plays the mental game very well in that he is more playing chess out there route-running. What I mean by that is everything he’s doing is trying to set you up to get you to go somewhere else.

“He’s not just trying to beat you. He’s trying to really fool you.”

White used Jeudy’s touchdown against the Falcons in Week 9 as an example.

It’s a simple comeback route, he said. But when Jeudy throws his hand up knowing that he wasn’t going deep, he fools the defensive back into thinking he’s running a different route. The corner bites and Jeudy has a walk-in touchdown.

“Those are little nuances that you can see that he’s playing more of a mental game,” White said. “He’s really understanding how to set this guy up, with or without the ball. He’s playing chess out there, using his athletic ability and also really thinking on the run.”

Jeudy’s ability to out-think his opponent is not something that happened over night or just this season. It’s something that’s taken years of studying and perfecting, which is why Jeudy spends his summers working out at the Receiver Factory.

“He’s an excellent route runner because he studies it,” Smith said. “You can tell it’s a part of his craft, it’s who he is. He’s relentless in his approach. Look at how much better he’s gotten since the beginning of the season.”

Smith and McCaffrey both admit neither of them were the type of route runner coming out of college that Jeudy currently is. McCaffrey was taken in the third round by the Giants out of Stanford and Smith went undrafted out of Missouri Southern.

Both had to work their way into playing time in Denver and a large part of their success came from the chemistry they built with their quarterback and now Broncos general manager, John Elway, who drafted Jeudy.

“You’re not just born a great route runner,” said McCaffrey, who totaled 7,422 receiving yards and 55 touchdowns in his 13-year NFL career. “You have to practice the routes in your playbook and time them up with your quarterback’s timing and footwork and be exactly where you need to be exactly when you need to be there. It’s not just about creating separation, but creating separation at the right time when the quarterback is ready to throw the football. That’s really the key, I think, to becoming a great receiver.”

Smith echoed McCaffrey’s sentiment, saying it’s “when you catch those tough balls, you build trust.” Smith, who was inducted into the Broncos Ring of Fame in 2012 and is the franchise’s all-time leading receiver in yards and touchdowns, had that with Elway.

And it was their close relationship that helped the Broncos win back-to-back Super Bowls in 1998 and 1999. Smith and Elway connected on five passes for 152 yards and one touchdown in Super Bowl XXXIII.

“I think he has trust in Drew Lock, but it can go from trusting to really clicking,” said Smith, who totaled 11,389 receiving yards and 68 touchdowns in his 12-year NFL career. “And when you can really click with your quarterback, it’s freaking special, man. I had that with a few guys and they made my career. It was more chemistry than, ‘Rod really knows how to run routes.’

“It needs to be that this guy is on the same page as his quarterbacks -- it’s a completely different thing when you do it that way.”

Of course, while Smith, McCaffrey and those who have coached him have high praise for Jeudy, they all know there’s room for improvement in his game.

Smith, who is arguably Jeudy’s biggest fan other than his family, might also be his biggest critic. In his opinion, Jeudy needs to be more physical at the line of scrimmage. Smith said many rookie receivers have to adjust to the size and athleticism of defensive backs in the NFL, and in-particular, the different type of coverage they play.

“In college, they don’t play true, bump-man coverage that much,” Smith said. “I knew if he had any struggle, it would be that — being able to get off the line and separate is different in the pros than college because the guys in the pros are just as good, just your size and just as hungry. To me, what I saw early in his career was that. He didn’t get off the ball well against bump man. Even though he had separation, it’s about positioning in order to give yourself a chance to make a catch. And those are some of things I used to yell and scream at the TV about.”

Smith said he doesn’t yell at his television much anymore, as he’s seen tremendous growth in Jeudy over the last several games. He believes Jeudy should have at least 600 more receiving yards by season’s end and a few more touchdowns.

If he does that, Jeudy could be well on his way to joining Smith and McCaffrey as one of the best Broncos wide receivers in franchise history.

“I’m not worried about that,” Smith said. “Be consistent week-to-week and in 10 years you’ll look up and realize you had a hell of a career.”

McCaffrey agreed with Smith, believing Jeudy has a chance to be special.

“The opportunity is there,” said McCaffrey, now the head coach at Northern Colorado. “It takes talent. He has talent. It takes hard work and determination. It appears he’s going to put in the work and to learn and to grow and to develop. And it takes a little bit of luck. I had a little luck in my career and sometimes that’s all you need.”

Whether Jeudy will join the likes of Smith and McCaffrey is yet to be seen. No. 10 has a lot of football left in front of him, including seven more games this season.

But if McCaffrey could offer some parting advice to the rookie, it would be this.

“If you love this game, keep doing what you’re doing,” McCaffrey said. “Keep studying film. Keep studying the other great receivers in this league. Keep working with your quarterback. Keep asking a lot of questions so that you can become the best you can be.

“You’re off to a great start, so just keep being you. Because you’re pretty darn good.”