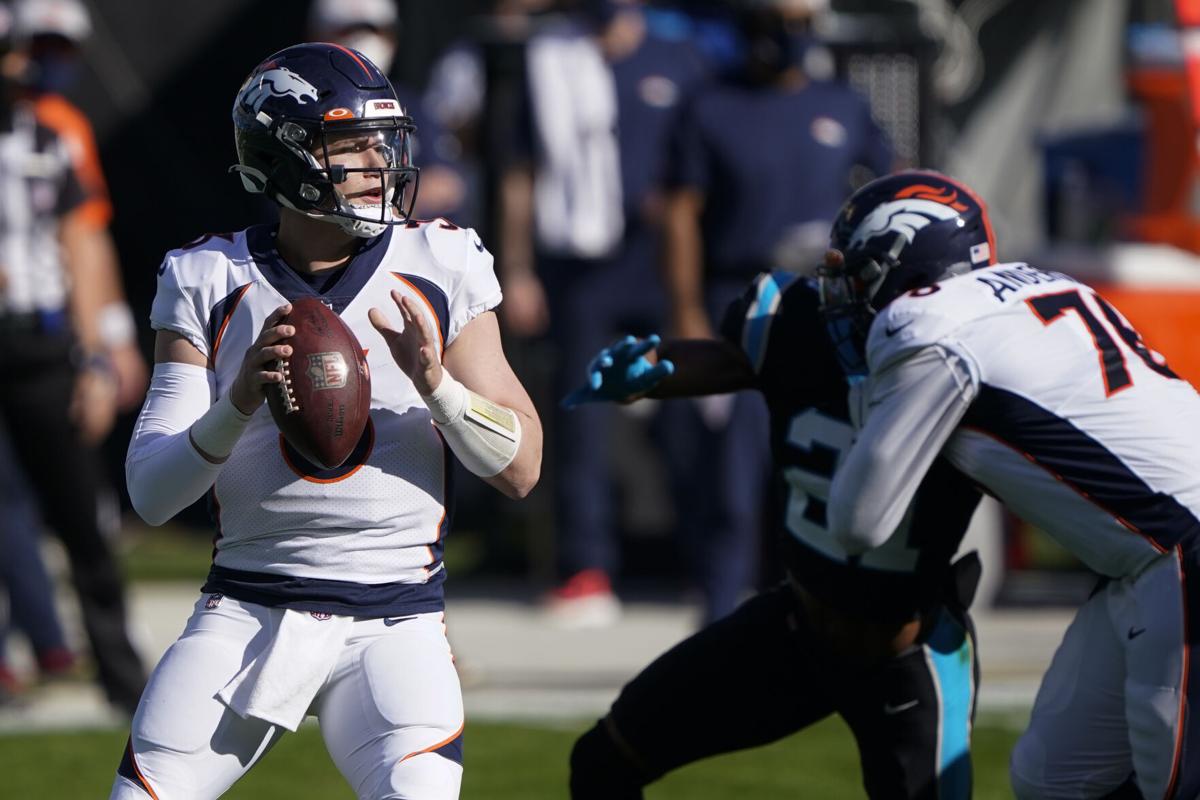 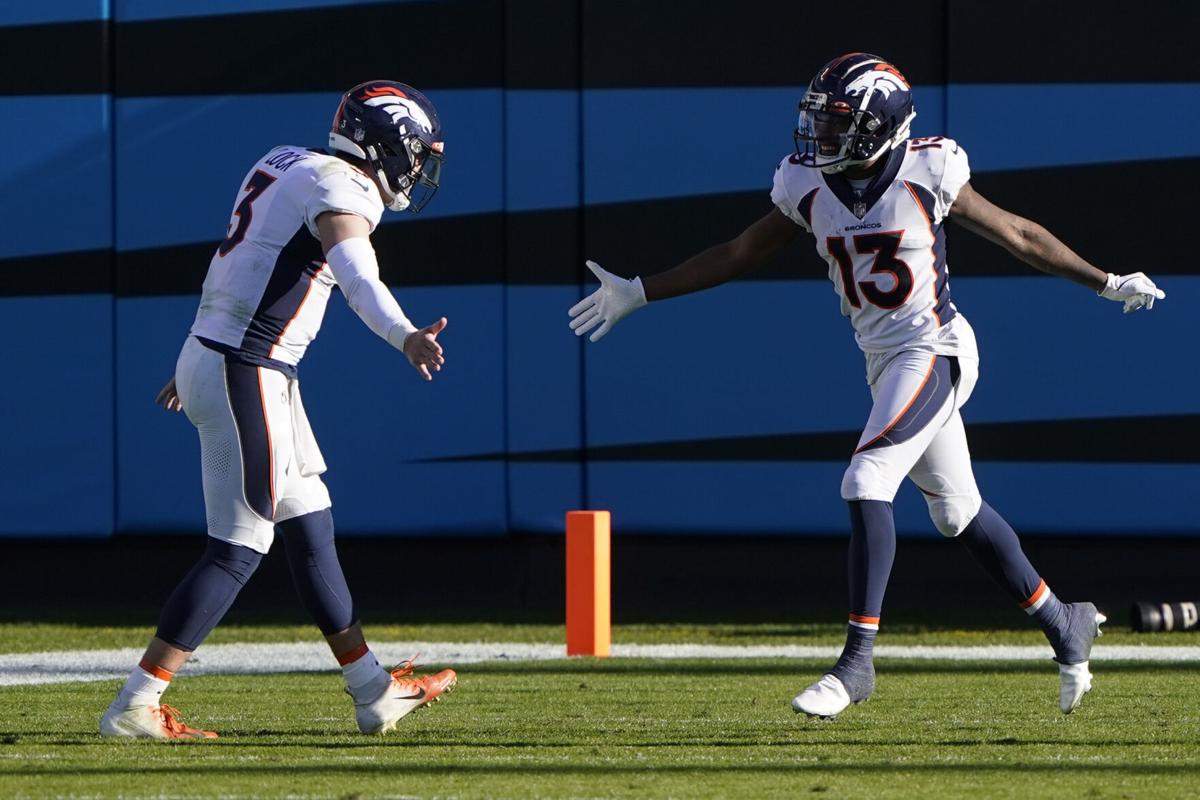 The Broncos had burst loose for a bunch of Brobdingnagian-like biggies.

None was bigger and better than Diontae Spencer’s 83-yard breakout — the Broncos’ first punt-return touchdown since the Super Bowl season. The former four-year member of the Toronto Argonauts and Ottawa Redblacks went all Rick Upchurch on the Panthers to present the Broncos with a lead in the first quarter. They ultimately emerged with a rather squeamish 32-27 victory.

Drew Lock finally discovered if he goes small and short sooner, as Broncos insiders and outsiders plea, he can go large and long later.

Playing for life as a starting quarterback in Denver next year, and as an oft-times Lock Mess Monster and Stay Puft Marshmallow Man, Drew grew into a combination of Godzilla and BFG.

He arrived in Charlotte with interceptions in seven consecutive games (three with two picks and one with four) and a passer rating of 67.1. He didn’t throw an INT and had a personal-best four touchdown passes and a near-perfect passing rating of 149.5.

Just as Drew drew it up. “Me coming in and doing my job,’’ he said. “Me starting to feel things.’’

Thirteen of his 21 successful attempts were Drew dink and dunks.

But he also had a touchdown pass to KJ Hamler for 49 yards and another for 37 yards and flings for 32 yards to Tim Patrick, 31 yards to Jerry Jeudy, 29 yards to Troy Fumagalli and 20 yards to Melvin Gordon III.

Including the Spencer return, the Broncos finished with 195 yards of extra large plays.

The Broncos were thisclose to league last in small plays previously.

“We hit some big plays,’’ Fangio understated. These plays Sunday were like "South Pacific," "Camelot," "Fiddler On the Roof," "A Chorus Line" and "Hamilton."

And the Broncos still aren’t playing with their No. 1 Pro Bowl receiver, Courtland Sutton — who had 72 receptions for 1,112 yards in 2019 — and shortly into Sunday, lost tight end Noah Fant, first in catches with 44, who was forced to depart with severe stomach distress. He joined left tackle Garett Bolles on the ill list. Both may have experienced food poisoning.

However, the Newbie Kids On The Block — Jeudy, Hamler and Fumagalli — picked up the pace. Tight end Fumagalli had a career day with four catches for 53 yards and a near-touchdown (that was ruled stopped 2 yards shy). Where’s he been since being drafted in the fifth round in 2018? Injured, waived, injured again, with the Texans on their practice squad, re-signed by the Broncos, elevated to the active squad, playing almost every down.

Hamler, the Human Joystick, produced a two-touchdown day, and Pro Bowler-in-waiting Jeudy was on the receiving end of two Lock passes for 42 yards. Patrick definitely has caught on with 43 receptions, 639 yards and a Broncos-high six touchdowns, all in the red zone.

We can imagine this group with Sutton and young tight end Albert Okwuegbunam, also on injured reserve, next season.

If only Lock becomes as consistent as a Cartier watchmaker, doesn’t try to be The Man or the Mandalorian on every possession and isn’t the primary reason for a team at the bottom of the league with turnovers. Lock was bashed into a fumble Sunday.

He has 25 interceptions and fumbles in 15 games.

John Elway communicates with Lock on a regular basis offering guidance. But John probably hasn’t mentioned that in his first two seasons, he threw 29 interceptions and fumbled 20 times. Do as I say, not as I did.

Lock was a natural Sunday, checking down to the backs and the tight ends, targeting eight receivers, not panicking on the run as he frequently has, leveraging on his back foot and staying calm even behind an offensive line that seemed to be chosen out of a Crayon box.

When the Panthers were menacing in the fourth quarter and sliced the advantage to just five points with 5:03 remaining, Lock scrambled for 6 yards, flipped to Gordon for 20 yards and discovered Hamler, as free and clear as a paid-off mortgage, on a 49-yard touchdown pass play.

Now, Drew Lock will be measured Saturday against Josh Allen.

After a strong opening three quarters was followed by a shaky start to the fourth, the Denver Broncos' beaten-up defense was going to be judged by Carolina’s final drive Sunday.