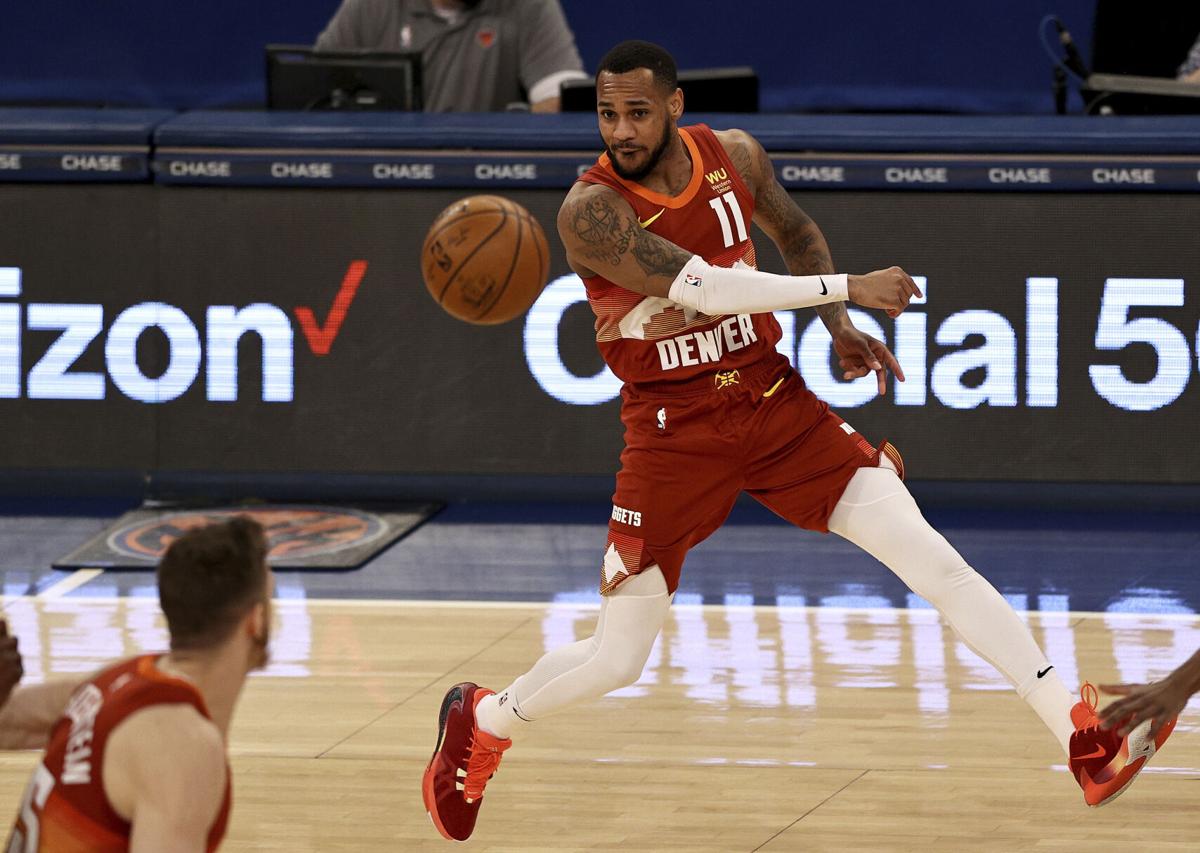 Denver Nuggets' Monte Morris (11) passes the ball in the first half of an NBA basketball game against the New York Knicks, Sunday, Jan. 10, 2021, in New York. (Elsa/Pool Photo via AP) 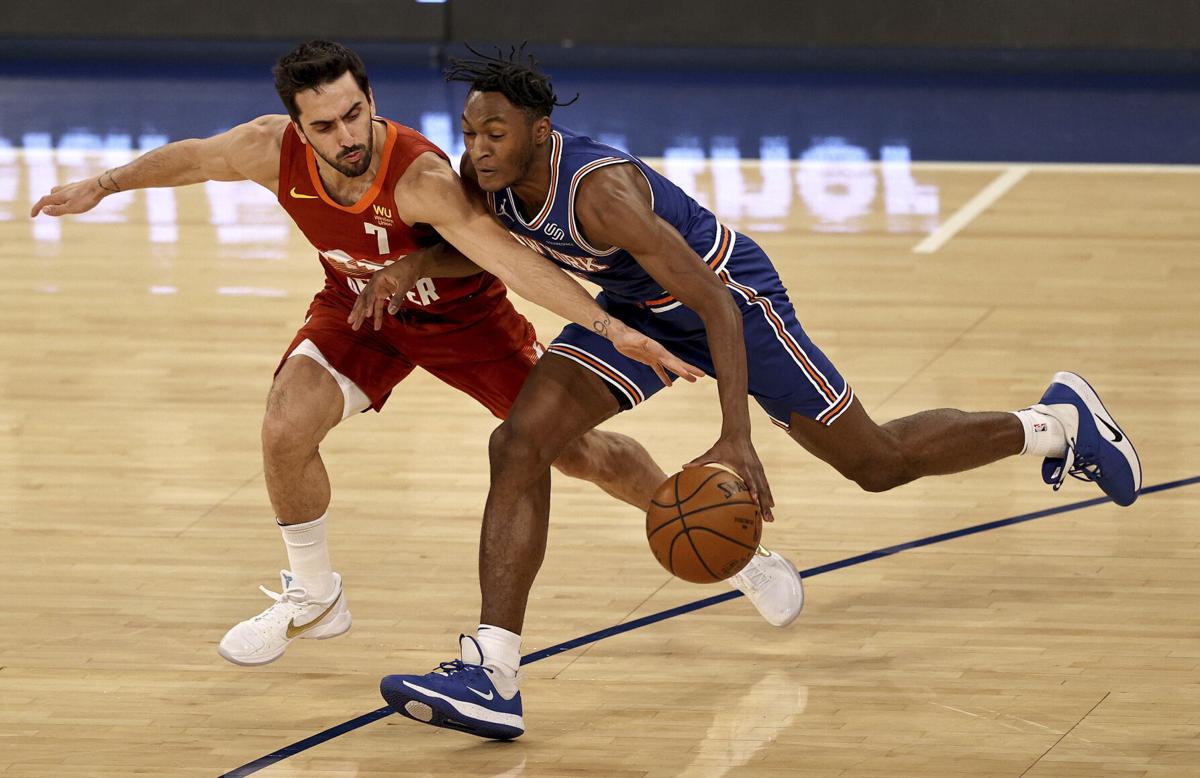 Denver Nuggets' Facundo Campazzo (7) tries to steal the ball from New York Knicks' Immanuel Quickley in the first half of an NBA basketball game Sunday, Jan. 10, 2021, in New York. (Elsa/Pool Photo via AP)

Denver Nuggets' Monte Morris (11) passes the ball in the first half of an NBA basketball game against the New York Knicks, Sunday, Jan. 10, 2021, in New York. (Elsa/Pool Photo via AP)

Denver Nuggets' Facundo Campazzo (7) tries to steal the ball from New York Knicks' Immanuel Quickley in the first half of an NBA basketball game Sunday, Jan. 10, 2021, in New York. (Elsa/Pool Photo via AP)

Bench contributions and defense, two things Nuggets coach Michael Malone has criticized through the first nine games of the season, came together the 10th time.

Sunday’s 114-89 win over the host New York Knicks marked the first time the Nuggets held their opponent to fewer than 100 points and improved Denver’s record to 5-5. The Nuggets’ best defensive effort of the first nine games came in Saturday’s 115-103 win over Philadelphia, which only had seven healthy players. It’s no coincidence, Malone believes, the Nuggets have won four of their last five.

“I think our defense in the last five has been a lot better than it was to begin the season in the first five games,” Malone said. “A marked improvement.”

The bench and the team’s defense peaked in the second quarter.

After the starters handled most of the first quarter and opened up a 28-21 lead, the reserves — Monte Morris, Facu Campazzo, P.J. Dozier, JaMychal Green and Isaiah Hartenstein — opened the second quarter on a 10-0 run that increased the lead to 18. The Nuggets led by 21 at halftime.

“The second unit, they’ve definitely been providing that boost when they come in the game,” starting guard Gary Harris said. “They’ve been holding it down.”

Denver’s bench outscored the Knicks’ reserves 54-21. Morris and Dozier led the bench players with 12 points apiece, while Green added 10. Morris, the most veteran member of the second unit, said he challenges his group to either pick up where the starters left off or provide a boost if there’s been a sluggish start.

“Me and JaMychal being some of the most experienced guys coming off the bench, we really be the voice in the huddle and (get the guys) ready to try to outplay the other team’s bench every night we can,” Morris said.

The Knicks, led by Julius Randle’s game-high 29 points, cut the Nuggets’ advantage to 14 late in the third quarter before Morris hit a pair of 3s. That spurt helped Denver get the lead back to 18 to start the fourth quarter.

“We know he’s going to value the ball at a very high level, make his teammates better, and he hit a couple of shots in that third quarter when they were trying to sneak back into the game,” Malone said. “I thought Monte made a couple of big plays for us.”

The 82-64 lead after three allowed Malone to give the starters the fourth quarter off. Nikola Jokic led the Nuggets with 22 points, 10 rebounds and five assists, while Harris and Paul Millsap added 14 and 10, respectively. Malone was pleased he didn’t have to play any of his starters 35 or more minutes to win, something he said can hurt in the long run. The big lead also allowed his bench additional time before the third unit handled the final few minutes.

“In that (bench) lineup, is three brand-new players in a Nuggets uniform: Facu, JaMychal and Isaiah. Creating on-court chemistry does not happen right away,” Malone said. “It takes time. It takes experience, and it takes minutes on the floor. I think those guys have been getting that as of late, and you can see the on-court chemistry.”

With Tuesday’s game against the Nets separating the Nuggets from a 3-0 road swing, Malone wants to see another step forward defensively.

“We challenged our players to guard one on one but also to give the requisite help behind that. I thought we had pretty good examples of that tonight,” Malone said. “The reality is, if we want to be a winning team, a team that can contend for a playoff spot in the deep West, our defense had to improve. It has so far. Now we’re going to try and close out this road trip with one more win in Brooklyn.”