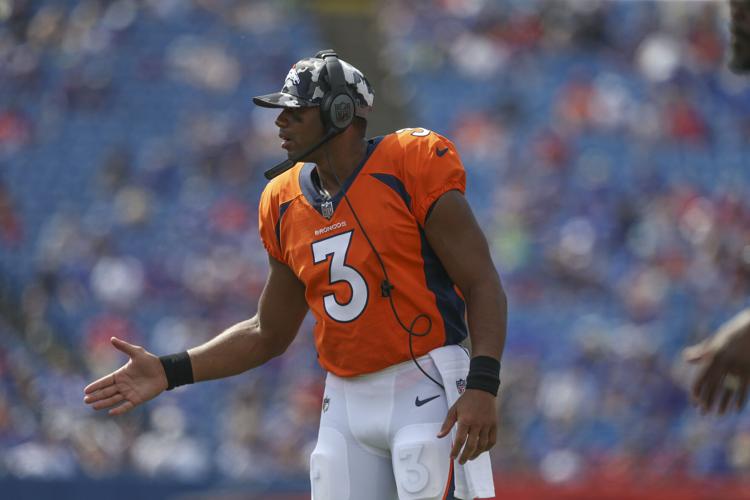 Denver Broncos quarterback Russell Wilson on the sidelines during the second half of Saturday's preseason game against the Buffalo Bills in Orchard Park, N.Y. 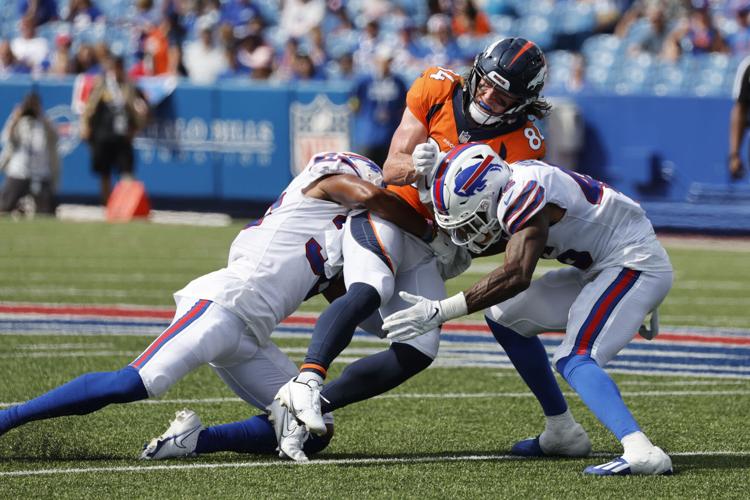 Denver Broncos quarterback Russell Wilson on the sidelines during the second half of Saturday's preseason game against the Buffalo Bills in Orchard Park, N.Y.

The Broncos will live to learn Nathaniel Hackett’s approach to his first preseason was a mistake.

These aren’t the ready-made Green Bay Packers he’s coaching. These are the rebuilding Broncos.

Oh, Saturday’s 42-15 loss to the Buffalo Bills at Highmark Stadium in Orchard Park, N.Y., was only a preseason game that doesn’t count. The Broncos did not play their front-line starters.

For most of this good ol' fashioned butt whupping, neither did the Bills, by the way. And they beat up the Broncos.

This has been the least-physical training camp ever to stroll and whistle through Dove Valley — or Greeley, for that matter. It’s been one long game of two-hand touch. Hitting is at a bare minimum, tackling is grounds for a stern chat. Were the same rules in effect on Saturday, or are Case Keenum and the Bills backups that much better than Denver's backups?

I didn’t play in the NFL, if you hadn’t noticed, so this is pure speculation: Wouldn’t it be tough to flip a switch from two-hand touch to playing the Seahawks in Week 1? Sure seems like it would be tough.

“I don’t like the preseason,” Hackett said before. “That’s just my philosophy and upbringing.”

I respect a man who sticks to his principles in the face of criticism. Lord knows we could use more bold men in a flock of sheep, and hopefully it turns out Hackett was right. But the Packers teams from which Hackett emerged had Aaron Rodgers and a whole bunch of proven dudes who knew the Super Bowl was their one-and-only goal. Likewise, the Los Angeles Rams kick back and chill out in training camp, one luxury with an all-star roster. But here with the Broncos, only Brandon McManus, the kicker, has experienced so much as a winning record.

“In the end, we want to be smart with the guys,” Hackett said.

Broncos general manager George Paton was smart to select Montrell Washington in the fifth round of the NFL draft. Washington was a lonely bright spot for the Broncos, again, with a 19-yard reception and 35-yard kick return. Put him in, Coach. No. 12 could be wide receiver No. 3.

The rest of a long trip east was a waste of expensive jet fuel. The Bills scored touchdowns on their first six possessions. Quarterback Josh Allen accounted for only one of the touchdowns. Gosh, Allen was so fun to watch at Wyoming.

I predicted 9-8 for the Broncos, on the low end for most prognosticators. Still looks about right.

The Bills looked like the betting favorites to win Super Bowl LVII. The Broncos looked like they haven’t tackled or been tackled since January. First half, the Bills outgained the Broncos 333-70, had 20 first downs to Denver’s seven and 237 passing yards to Denver’s 70. The Bills averaged eight yards per rush. For the second-tier Broncos, the afternoon was U-G-L-Y ugly.

“You (allow) six touchdowns on six drives, obviously nobody did good,” Hackett told reporters after.

This AFC West allows no wiggle room. The Chargers, Chiefs and Raiders won't wait for a Broncos slow build. Good news is, Russell Wilson looked lovely in a Broncos uniform, even wearing a headset. His first live snap will come on Sept. 12 at Lumen Field in Seattle.

Stand by to learn if a chilled-out approach does.

Broncos vs. Bills observations: Defense gets torched in 42-15 loss

DENVER — The Broncos are going to want to forget Saturday's preseason game against the Bills.