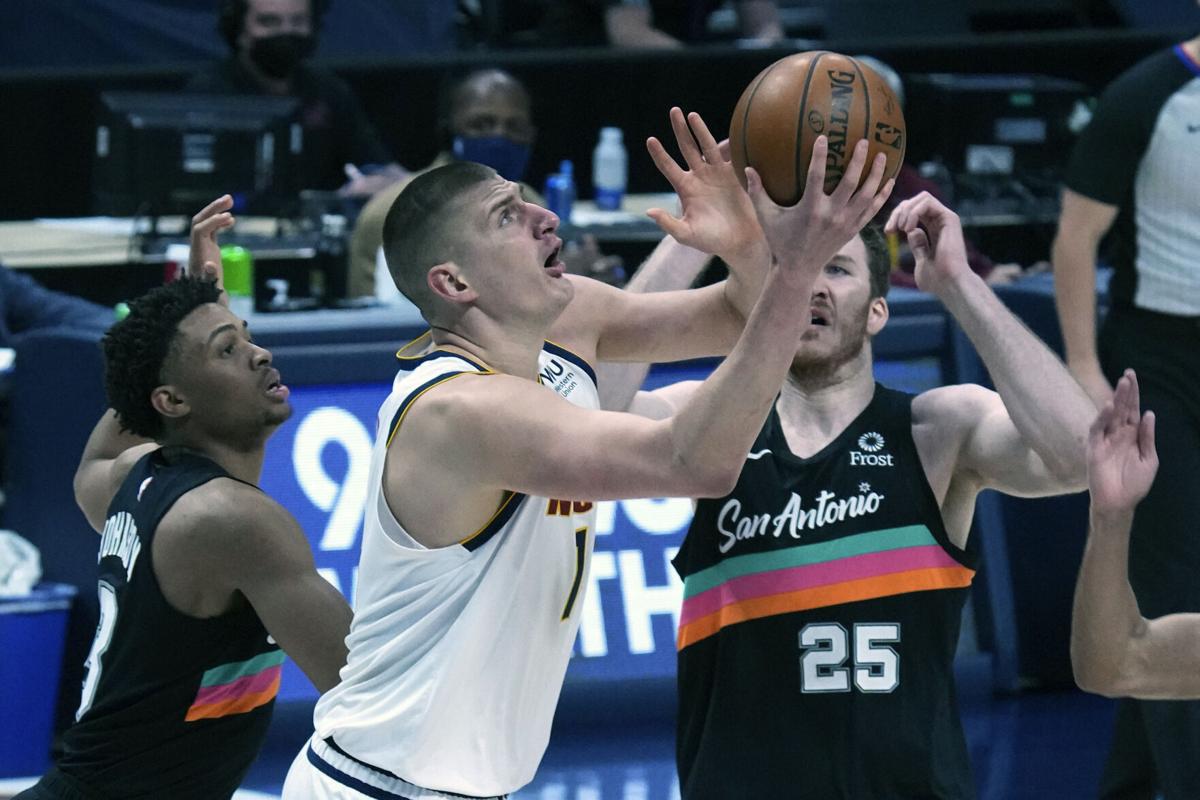 Denver Nuggets center Nikola Jokic (15) goes up for a shot against the San Antonio Spurs during the third quarter of an NBA basketball game Wednesday, April 7, 2021, in Denver. (AP Photo/Jack Dempsey) 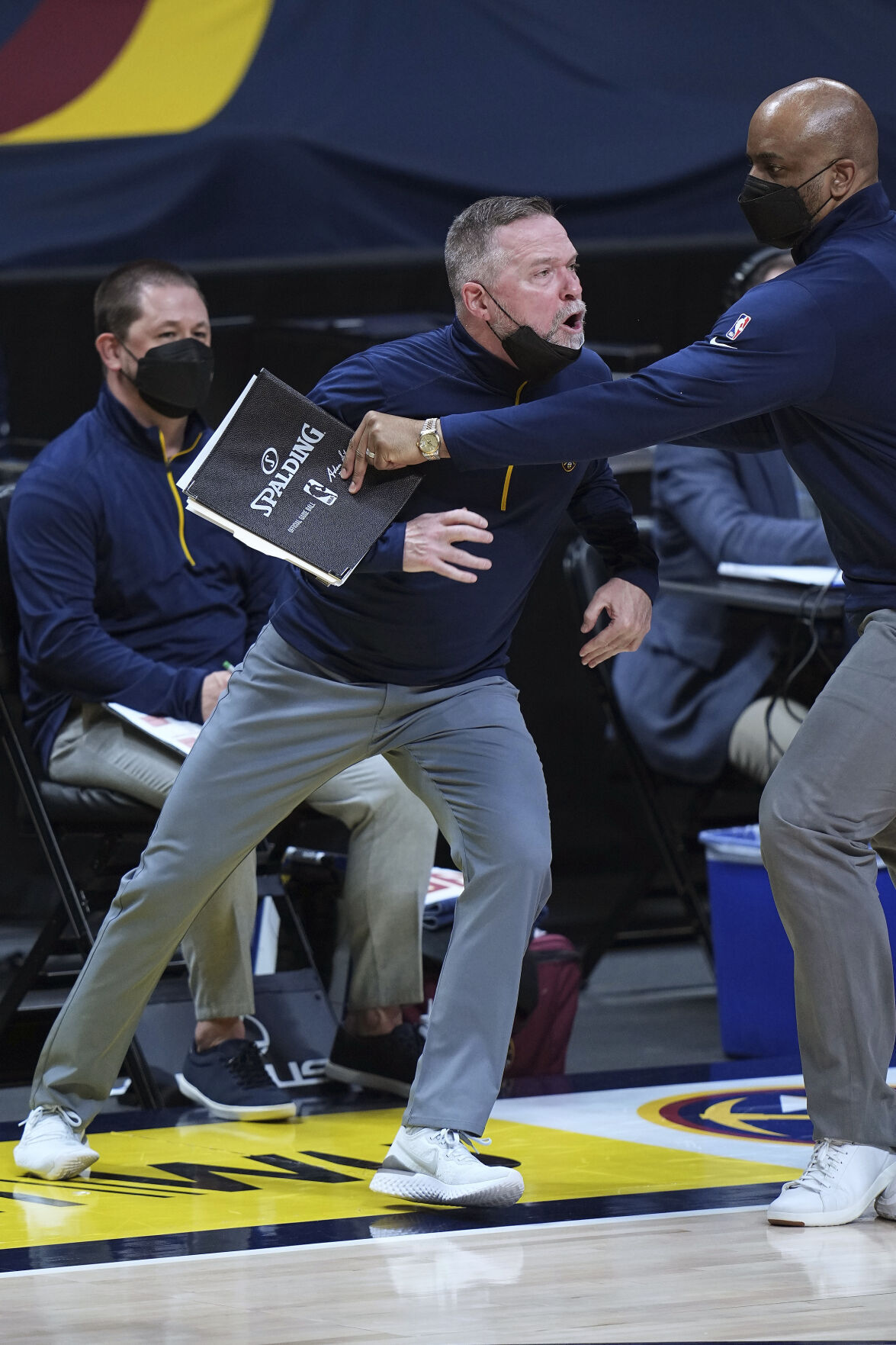 Denver Nuggets coach Michael Malone reacts to being ejected during the second quarter of the team's NBA basketball game against the San Antonio Spurs on Wednesday, April 7, 2021, in Denver. (AP Photo/Jack Dempsey)

Denver Nuggets center Nikola Jokic (15) goes up for a shot against the San Antonio Spurs during the third quarter of an NBA basketball game Wednesday, April 7, 2021, in Denver. (AP Photo/Jack Dempsey)

Denver Nuggets coach Michael Malone reacts to being ejected during the second quarter of the team's NBA basketball game against the San Antonio Spurs on Wednesday, April 7, 2021, in Denver. (AP Photo/Jack Dempsey)

DENVER — What do you get the big man who can do everything?

The Nuggets already made a formal case to the NBA office that star center Nikola Jokic gets a raw deal when it comes to a fair whistle. Wednesday night in a 106-96 win over noted ref-whisperer Gregg Popovich and the San Antonio Spurs, Michael Malone unloaded his issues onto the officiating crew.

Midway through the second quarter, Mount Malone erupted. He took offense to a no-call that saw the ball knocked free from Joker’s hands. Boom, technical foul. Double boom, another one.

“My job as the head coach is to fight and protect all of my players,” Malone said. “And tonight I did that.”

Malone claimed afterward that Jokic promised to pay his inevitable fine. I’m not so sure that actually happened, but smooth move by Malone to put Joker on the spot.

“He threw me under the bus,” Joker said with a smile.

It was past time somebody in Nuggets gear took one for the Joker. Just in case you’ve been living under a rock, or hosting a show on ESPN, Jokic is turning the NBA on its side. Some time at June's end, the Nuggets will have their first MVP. Joker’s earned the Kia-sponsored award, even if there’s no way he’s fitting into a Kia.

But before the playoffs tip off, Jokic must earn some respect from the men in stripes. You and I both know a handful of postseason games are decided by a whistle or three.

It was about scoring a little respect for the best player in the world. See, the Nuggets don’t have many problems these days. They’re 6-0 with the best offensive rating in the league since Tim Connelly's front office shoved their chips into the pile by trading for forward Aaron Gordon. They’ve won 16 of 19 games, and a ferocious starting five has only six games together.

At this rate, downtown Denver might center the sports universe for a couple of weeks in July, when the NBA Finals, NHL’s Stanley Cup final and MLB All-Star Game could go down at the same time. Hmmm. No wonder Gov. Jared Polis already guaranteed “packed” stadiums this summer in Denver. The guv didn’t put $300 million in his bank account by passing up an easy payday. Money still runs things.

But one problem the Nuggets do have is a whistle problem. Their MVP candidate gets a bad one. I’m not a blame-the-ref guy, but check out these stats and tell me a center whose usage rate is through roof gets a fair shake: Joel Embiid, 11.4 free throws per game; Rudy Gobert, 5.9; Bam Adebayo, 5.9; Karl-Anthony Towns, 5.3. And the Joker himself? 4.7.

“You can sense the frustration,” Malone said. “I want him to focus on playing and not get caught up in the refs. That can take you off the task at hand, so that’s where I have to help him.”

Wednesday night was Malone helping Jokic. Trying to, at least. We’ll see. The proof is in the whistle. Considering the scratches and welts that turn Joker’s arms bright red, the Nuggets might need to hire a corner man: Cut me, Mick!

“The hardest part of getting ejected in the first half is sitting in the locker room ...,” Malone said.

Joker attempted four free throws, by the way, and finished with 25 points, 10 assists, nine rebounds. Nobody's seen anything like this guy.

“Yes, I really want to pay the fine (for Malone),” Joker said.

The Big ATM’s making all the Nuggets rich. Anyone else think Malone should pick up this tab?