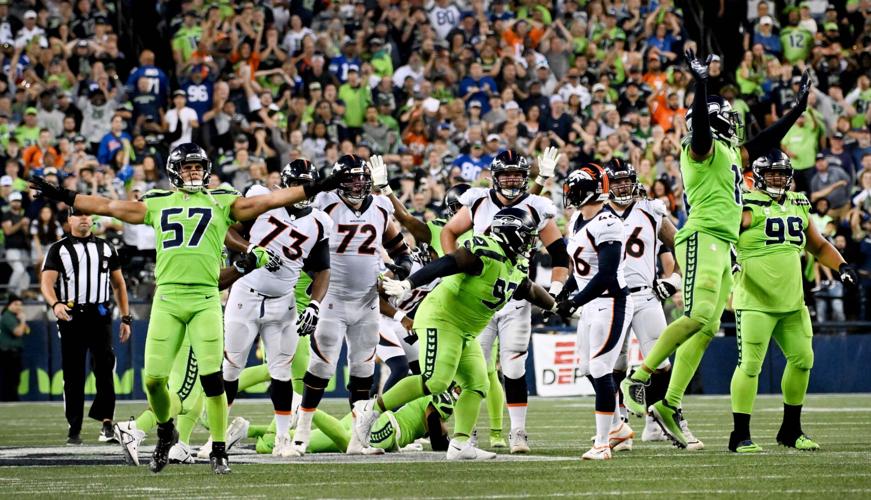 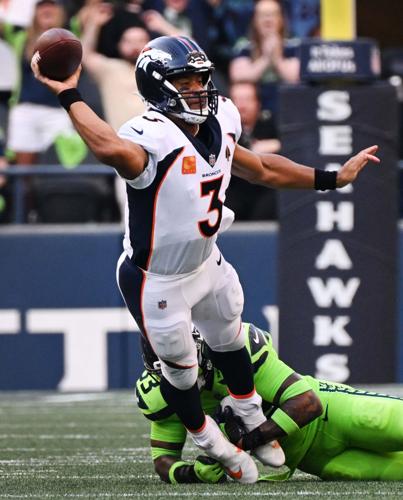 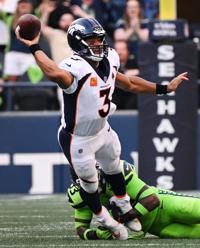 On a season-opening night the Seahawks “12s” will remember forever and the Broncos had some explaining to do, Nathaniel Hackett forgot who’s really the Broncos boss here. It’s not him, and it’s definitely not Brandon McManus, who missed a 64-yard prayer that would have won it.

Instead, the Seahawks escaped with a 17-16 win on a rowdy Monday night at Lumen Field.

Check the payroll. The boss is Russ, the quarterback, No. 3. Fourth-and-5 near midfield, game on the line, and Hackett took the ball out of Wilson’s hands — in Russ's old house.

“I think we had just given up a sack right before that, so I wanted to be sure we took a chance when we had a chance,” Hackett said after, defending his decision.

Anyone else have flashbacks of John Fox telling Peyton Manning to take a knee against the Ravens? Remove the final 2 minutes from of the conversation, and the Broncos offense cooked in Wilson's debut. Here's a hunch they'll take 330 passing yards and 103 rushing yards most nights. Hackett's play-calling was pretty nifty.

But the new Broncos are built to win and played to not lose. With new owners Rob Walton and Greg Penner wandering the sideline prior to kickoff and new quarterback Wilson drowning out the boos, the new coach failed his first exam.

When Hackett subbed out Wilson in favor of McManus, even Seattle's Pete Carroll couldn’t believe what he saw — and that’s a coach who saw Russ complete 19 game-winning comebacks in this building alone.

“I was surprised they took Russ out at the end,” Carroll said. “We weren’t thinking field goal there. We were thinking they were going (for it). It gave us a chance to win the game on that play.”

It’s tough to say if the loud, proud Seahawks crowd rattled the Broncos, or the Broncos’ lack of preseason action rattled the Broncos. Twelve flags for 106 yards, missed tackles all over the field, clock management that made you wonder if Vic Fangio ever left town. It’s almost like a country club training camp didn’t have the Broncos ready for prime time. Was it smart to sit the starters in the preseason? Yes. Does not playing football together prior to the opener explain their sloppy game? That, too.

Russ’s revenge won’t come for a while. The Hawks are not on the Broncos schedule again until 2026. Wilson carried the Broncos into the red zone four times. Four times they failed to score a touchdown, twice losing the ball on goal-line fumbles by Melvin Gordon and Javonte Williams.

“I was just trying to make a play,” Williams said from his locker.

And that right there is why the Broncos traded the farm to finally pin down their next franchise quarterback— to make a play. Hackett’s conservative approach never gave Russ a chance. Twisting a knife, the Seahawks wondered aloud if the Broncos already have trust issues, a shot at Wilson’s exit.

“Maybe they don’t trust him in that situation,” Seattle linebacker Uchenna Nwosu said.

Shoot, I switched on ESPN’s ManningCast to hear what Peyton had to say about the whole thing, starting with the decision to treat a 2-minute drill like a two-day drill with all the time in the world.

“I think they should call timeout — like now,” Manning said.

Hackett’s a numbers guy, yet the math didn’t add up. McManus’s career long is 61 yards. The Lumen Field record is 56 yards. The only math the Broncos needed to remember was $245 million, the contract extension awarded to Wilson to win Monday Night Football games — in his house.

The football hero of Wilson’s return was Geno Smith, who serenaded the quarterback with ballads they used to save for Russ.

The Seahawks “12s” chanted “Ge-no! Ge-no!” like a scorned lover showing off her new boyfriend at her ex’s party. The city of Seattle wanted this one bad. Riding the light-rail tram to the game, a Hawks fan told me in no uncertain terms: “We may not win another game, but we have to win this one.”

Russ couldn’t win this one from the sideline with his fingers crossed.

You know how the Hackett honeymoon came to a close only one game in? Death by flinches.

Clueless in Seattle, the Broncos lost by a point and an exclamation point Monday night in their outrageous opener.