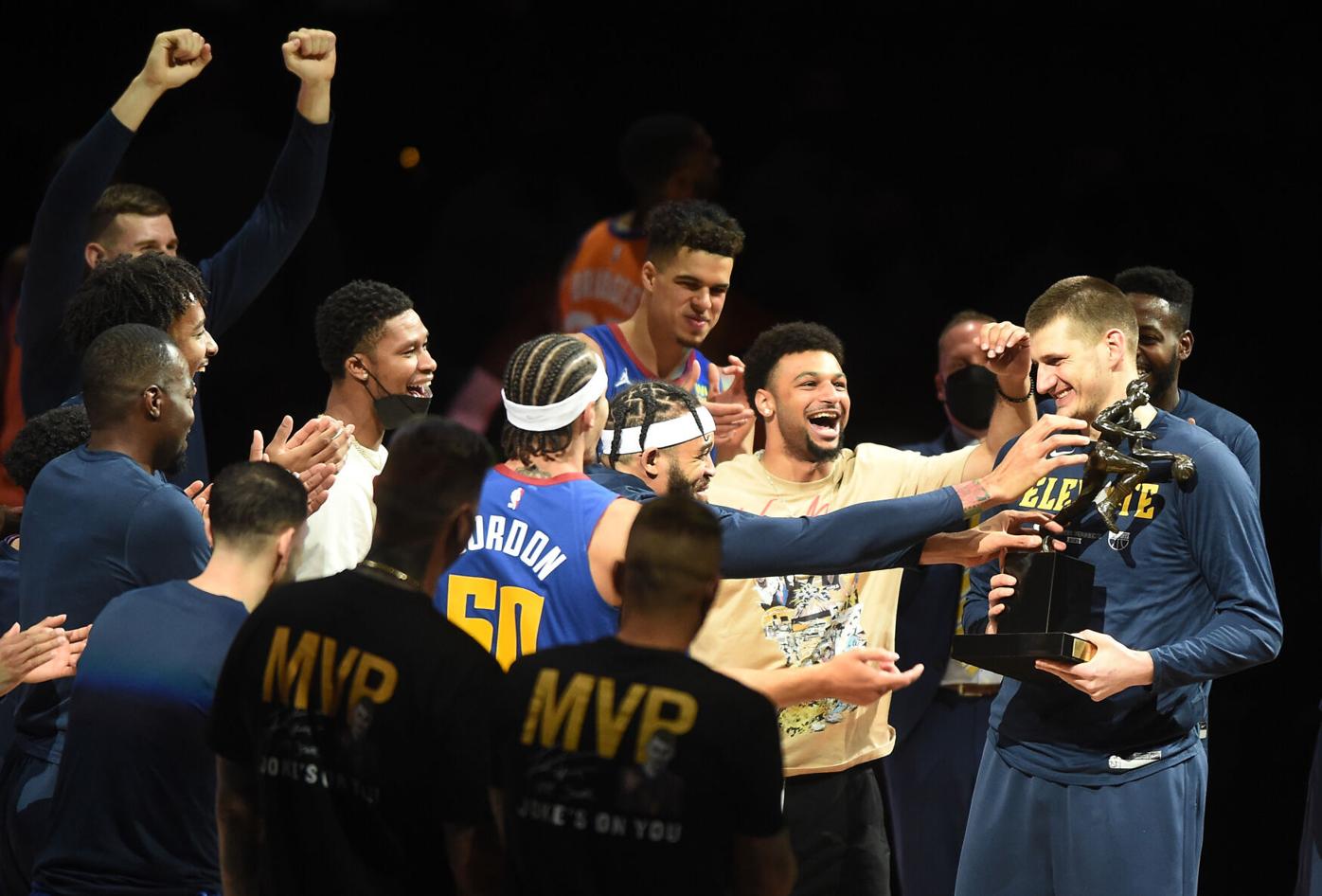 Denver’s Nikola Jokic is greeted by his teammates after being presented the NBA MVP trophy before game 3 of the conference semifinals at Ball Arena on June 11, 2021. Jokic is the first Denver Nugget to get an MVP award and the first second-round draft pick to get the award. (Photo by Jerilee Bennett, The Gazette) 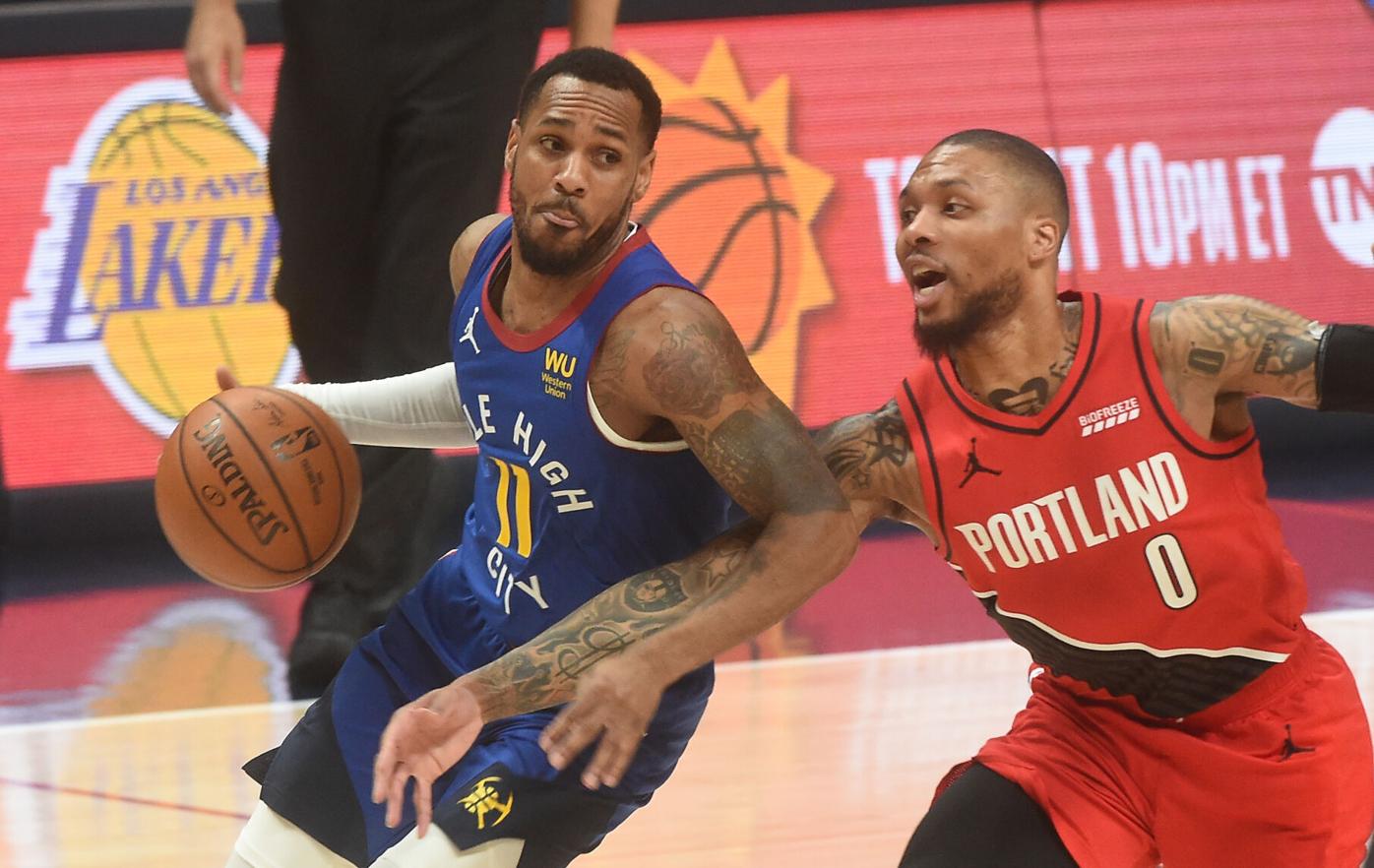 Denver’s Monte Morris drives past Portland’s Damian Lillard during game 5 of the first round of the NBA playoffs at Ball Arena on June 1, 2021. The Nuggets defeated the Trail Blazers 147-140 in double overtime. (Photo by Jerilee Bennett, The Gazette

Denver’s Nikola Jokic is greeted by his teammates after being presented the NBA MVP trophy before game 3 of the conference semifinals at Ball Arena on June 11, 2021. Jokic is the first Denver Nugget to get an MVP award and the first second-round draft pick to get the award. (Photo by Jerilee Bennett, The Gazette)

Denver’s Monte Morris drives past Portland’s Damian Lillard during game 5 of the first round of the NBA playoffs at Ball Arena on June 1, 2021. The Nuggets defeated the Trail Blazers 147-140 in double overtime. (Photo by Jerilee Bennett, The Gazette

DENVER — This is a fun Nuggets exercise, and I encourage anyone to give it a go whenever there is a Nuggets injury, contract issue, another something or other that’s not ideal.

Goes like this: Remember Nikola Jokic is still here.

It's like a day on the river. You'll feel so much better.

It was that way Tuesday when the Nuggets plopped backup-turned-starting point guard Monte Morris onto a media Zoom call for the start of training camp. Smart guy, Monte. Goes by Big Game 'Te. Or maybe you know him as one of the Nuggets' second-round steals, or the NBA reserve who dated Amber Rose. Whatever his reputation these days, Morris is entering a career-launching moment. He is charged with filling in for Jamal Murray for as long as Murray must rehab his surgically repaired left knee.

The Nuggets haven’t set a timeline for Murray’s return, but we'll all see one as he gets closer.

In the meantime, the assignment for Morris, in his own words: “Keep this Nuggets train rolling.”

And in the big picture it barely registers, because Nikola Jokic is still here. Joker has soared — OK, Joker has hopped — into Peyton Manning territory, into Magic Johnson territory, into Peter Forsberg territory. That’s what Colorado has in Nikola Jokic, the NBA MVP. The world just doesn't know or won’t admit it yet.

Before you crush my inbox for saying Joker is as good as those guys, that’s not what I’m saying at all. What I’m saying is he’s one of those rare house painters who has an extraordinary ability to cover up all the cracks. They make everything else look much better because they are them.

I see no reason Joker can't go back-to-back on MVP awards. As Nuggets scouting director Jim Clibanoff told me, Joker's greatest attribute is his brain. It's not like he's getting less smart.

Plus, part of his draw as MVP last season was how the Nuggets overcame myriad injuries to earn a 3 seed. Now there will be ample time to amplify his play during the No Murray stretch.

So that’s why the Nuggets began training camp in Southern California without the help of Murray and still could talk about competing for an NBA title without laughing. Joker is the Ace card, and his year-over-year improvement assures you the Nuggets got better while signing only one player in free agency, forward Jeff Green. His presence lets you know No Murray is a huge bummer, but the Nuggets are capable of staying afloat while they await the end of No Murray. From what I’ve been told about offseason workouts since Joker returned from Serbia in late August, the 26-year-old MVP has never looked better. If anything, he's more comfy.

“You would never know that he had won MVP,” Nuggets rookie “Bones” Hyland said Tuesday. “It’s like he don’t want to talk about it. ... It’s crazy. It’s hard to describe. When he walking in the locker room, when he walking in the gym, you would never know he won MVP. He’s grinding for another MVP, or he’s grinding for the next contract. I don’t know. He’s 1 of 1 for sure.”

The starting lineup the Nuggets are expected to roll out for the season opener Oct. 20 against the Suns is solid, for sure: Morris, Will Barton, Aaron Gordon, Michael Porter Jr, Jokic. The starting lineup they’ll finish the season with, knock on wood, is conference finals-good, as it was in the two weeks they used it last season: Murray and the other four. But the Nuggets are not worried about the No Murray stretch, not even in the least. They trust Morris because this will be his fifth season in the team’s system, and he’s earned between 22-24 minutes per game over the past three seasons. They trust Morris because he’s a smart player whose assist-to-turnover ratio hovers around 3 to 1. He’s already played in 43 playoff games, and he had more than two turnovers only twice.

“I like our team and the direction we’re going in,” Morris said. “It’s win or bust for us.”

Morris went from 174 pounds to 183 pounds last season to this season. I bet he averages 34-36 minutes in Murray’s absence. He had a career-high 28 points in Game 5 of the Blazers series, and it sure would help the Nuggets if he’d blow up for 28 points a few times next season. Needs to quit deferring as much. Be more assertive.

The Nuggets escaped the first round of the playoffs in three straight years for the first time.

“We’re not happy to just get there no more,” Morris added.

But mostly the Nuggets are not worried because Jokic is still here. I expect his seventh season will be better than his MVP season. During open gyms lately, “He’s just on another level. He shouldn’t be playing with us. It was just unfair,” teammate and BFF Vlatko Cancar said.

“I would say, yeah, we’ve got everything we need to get where we want to get,” Morris said.

Why's that? Nikola Jokic, the MVP, is still here.

Petr Cornelie will get a chance to make his regular-season NBA debut for the Denver Nuggets this season.