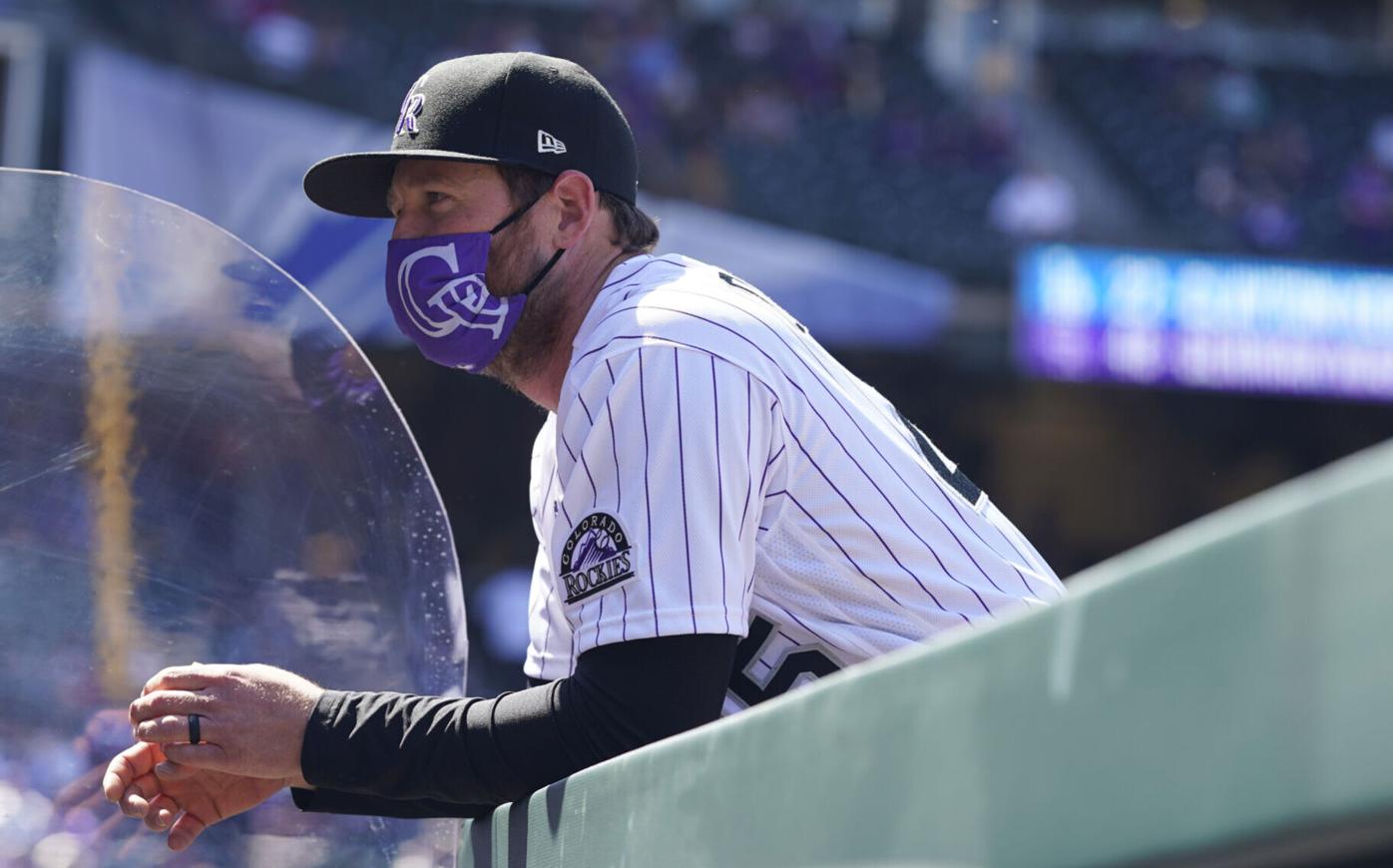 Injured Colorado Rockies relief pither Scott Oberg chats with an announcer in the first inning of a baseball game against the Los Angeles Dodgers Thursday, April 1, 2021, in Denver. Oberg has been sidelined because of blood clots in his arm. (AP Photo/David Zalubowski) 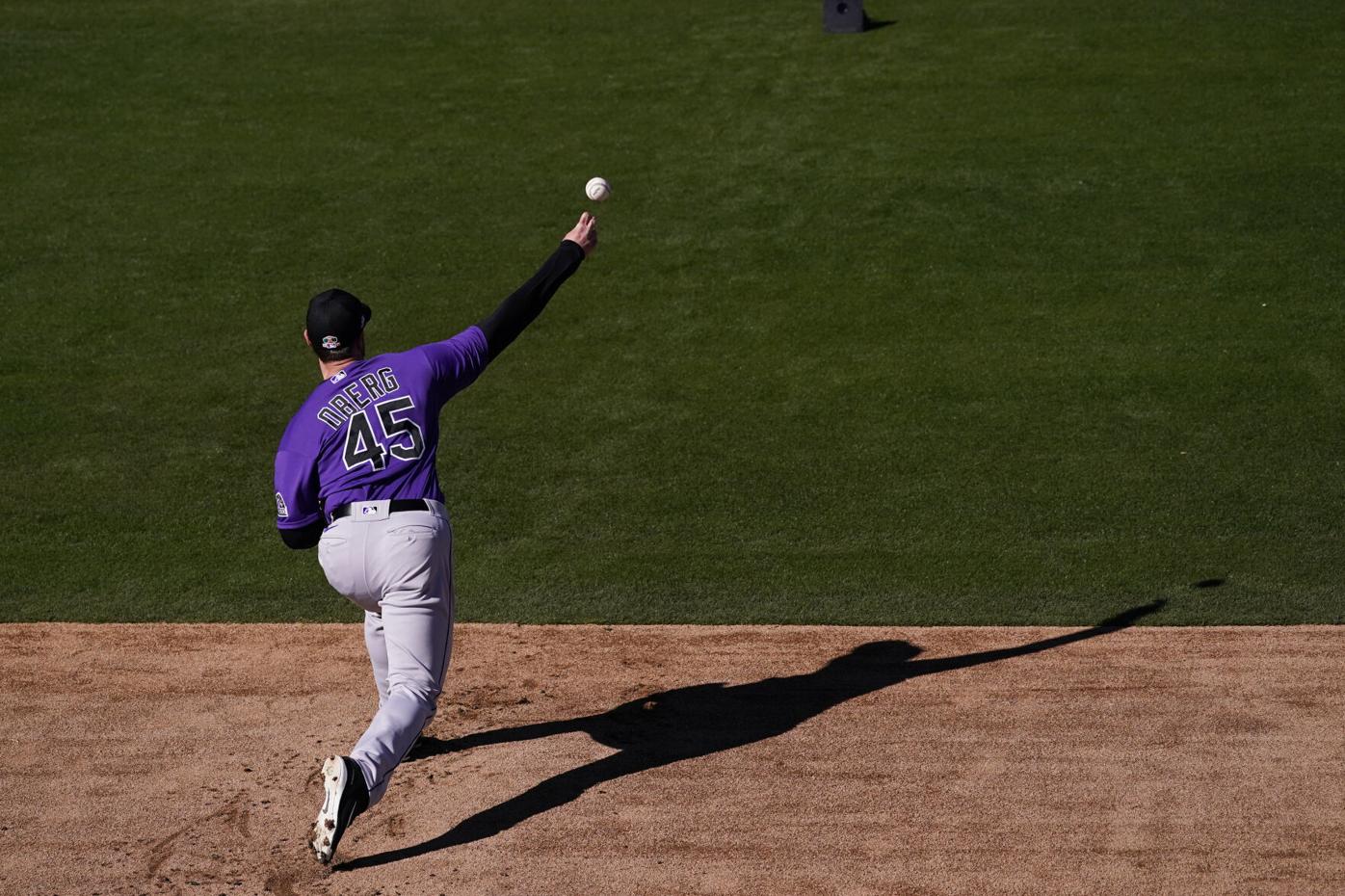 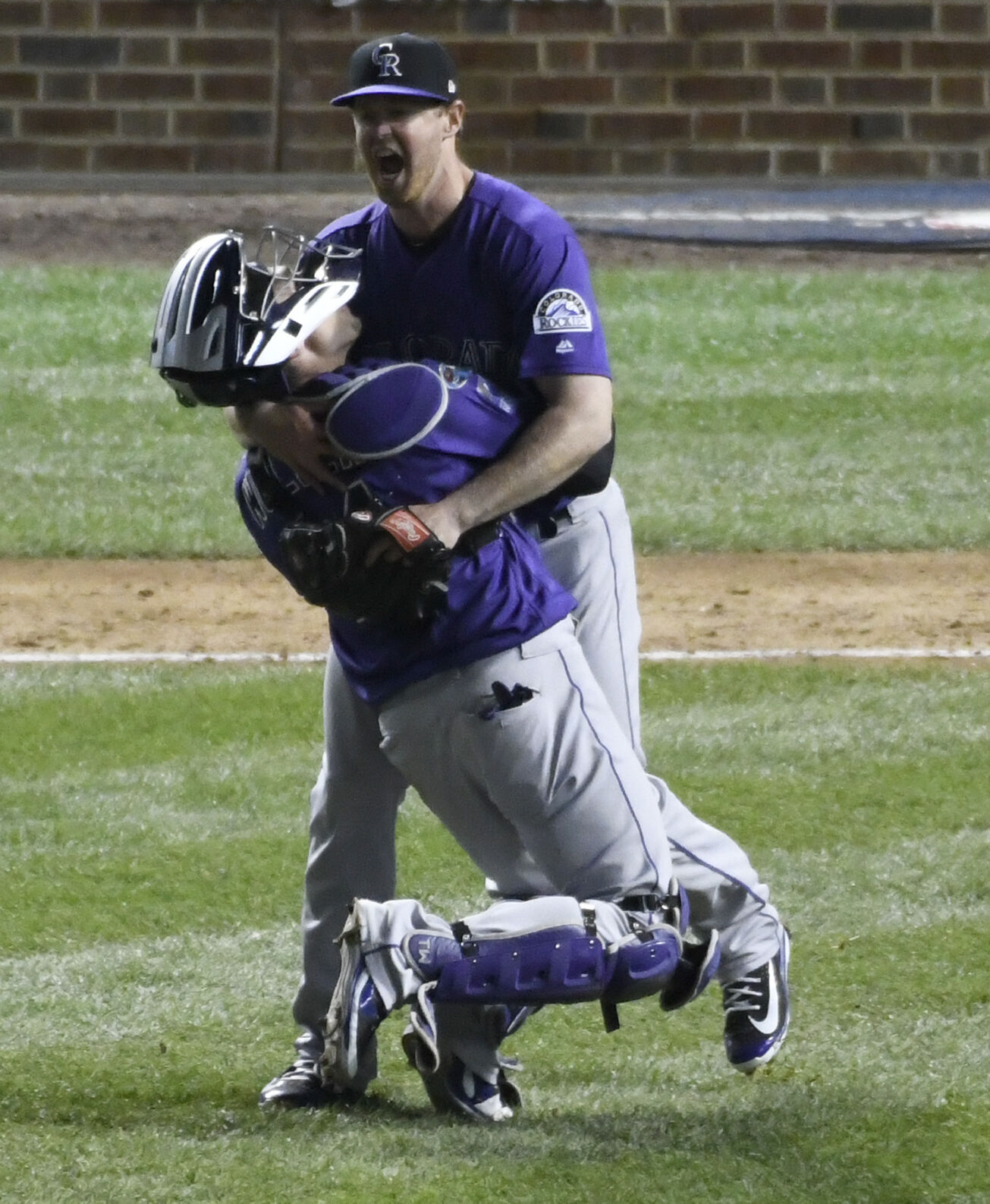 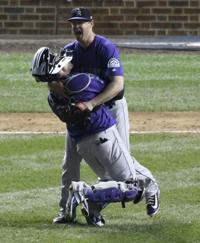 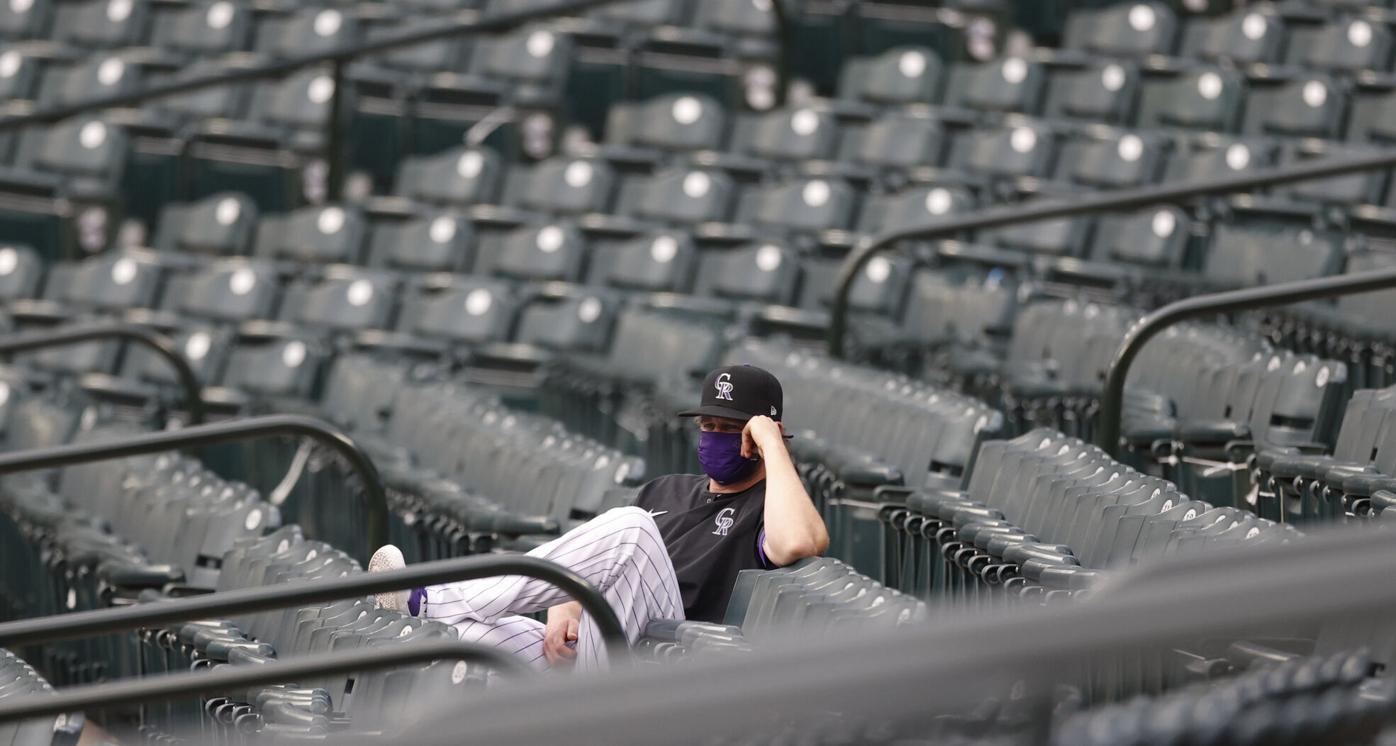 Colorado Rockies relief pitcher Scott Oberg looks on from the right-field stands in the first inning of a baseball game against the San Diego Padres Friday, July 31, 2020, in Denver. (AP Photo/David Zalubowski)

Scott Oberg watched each day as his teammates left the clubhouse and ran up the dugout stairs onto the field.

For most of his career, he was right there with them.

Instead, he observed games from the TV’s in the clubhouse last season, with his teammates playing just a few feet away from him. A fourth bout with blood clots in March sidelined him again for the entire year, threatening the career he built for himself.

He could have just gone home to New Jersey for the year, and watched games from the comfort of his living room couch. That’s not who he is though. Instead, he became everything from a scout to an analyst to an extra coach. Most importantly, he became a mentor to everyone from the rookies all the way up to veteran Daniel Bard.

Oberg isn’t giving up on the possibility of being able to play again. This offseason will be filled with tests and meetings with doctors as they try to zero in on the problem that has halted four of his seasons.

He knows what the odds are. But no matter what happens, he wants to find a way to remain around the sport.

“Baseball is always going to be on my mind,” he said. “It’s been on my mind since I was a kid and started playing.”

Oberg’s career can be summed up by two words: resilience and brilliance.

A 15th round draft pick out of the University of Connecticut, the Rockies signed him for a meager $85,000. He had recently undergone Tommy John surgery, and two years prior to that was diagnosed with psoriatic arthritis. He could barely walk at the time of the diagnosis and needed a cane to get around.

Most teams didn’t think he was worth the risk. An area scout saw something special in him though, and pushed for the Rockies to pick him.

They would soon see that gamble pay off.

Oberg was a machine in 2018 as the Rockies raced towards the playoffs, allowing only three runs in his final 16 games of the regular season. They trusted him come October with the prime-time post in the Wild Card game against the Cubs.

He struck out four batters, etching a permanent spot in Rockies’ history.

“Most nerve-wracking game in my entire life,” he recalled, adding that his back leg was shaking the entire time. “I really didn’t want to screw it up.”

The Rockies rewarded him with a $1.3 million contract in 2019 and the coveted closer spot. He was growing into one of the best relievers in baseball, and he had a 2.25 ERA in August when he started to feel tightness in his arm.

It’s not an unusual feeling for a baseball player, but it was similar to what he felt in 2016, when he had two surgeries to alleviate blood clots in the area. He was soon hospitalized, and needed a procedure to dissolve the clot. The same stroke of bad luck hit again in 2020, ending his campaign before it even started.

Shut down for the third time, Oberg went home searching for answers and a resolution. His doctors performed thoracic surgery at the end of September, a procedure that they thought would stop the blood clots from forming again.

He had hope. Pitching seemed like a real possibility again.

When baseball returned in February, so did Oberg.

With everything checking out normally, he was able to turn his focus back to just baseball. He was especially excited about his changeup, a pitch he got a few swings and misses on during scrimmages.

On March 22, about a week before the regular season started, Oberg pitched a scoreless inning against the Rangers. Everything was going as planned. Opening day was within reach, and he was expecting to resume his old role as a late-inning reliever.

Then the familiar signs of a blood clot hit him again.

He woke up the next morning and went to play catch, just like he did everyday. But something was off. His forearm was tightening and his hand was turning white. Then came the cramping and numbness.

Oberg knew what this all meant. He immediately went to a trainer, who couldn’t find a pulse in his wrist.

They called his surgeon back in Philadelphia, who urged him to go to the emergency room at the Mayo Clinic right away. They did more tests, and still couldn’t find a pulse. Oberg spent the night in the ICU and had surgery the next morning.

All the while, he tried not to worry too much. But a blood clot can be extremely dangerous, and even though they caught it early, it still could have spread to his lungs or heart.

“You just never know what can happen when you have to take a trip to the ER,” he said. “ I just tried to take it in stride and take the best advice that I can.”

He’s been through this all before, but that didn’t make it any easier. This one was the toughest one to deal with mentally, he said. Oberg knew what the risks were with his comeback. But it was worth a try to live out his dream, and his arm overall felt great until that morning.

He had gotten his hopes up. And his teammates and coaches, seeing how much progress he had made, had done the same.

“We’re all devastated by this, knowing the heartache that he’s been through with this problem,” manager Bud Black said right after the surgery. “We are crushed. This is life stuff. … This one hurts.”

A step towards his future

Oberg returned to the Rockies Salt River complex three days after his surgery in March, determined to find a way to stay involved. His teammates and coaches welcomed him back with open arms, and the baseball community did the same via texts and social media messages.

It didn’t take him long to find his spot.

Every morning began with coursework for his two sports management classes at Georgetown University. It's an 18-month masters program, and he plans to eventually pick out a specialty to focus on.

Then he traveled to the stadium. Instead of going out to the field to stretch like the other relievers, Oberg hunkered down in the video room. He watched footage of Rockies pitchers, then their opponents to help with scouting reports.

Afterwards, he sat down with relievers and talked them through what he saw. For the younger pitchers, he passed along advice on how to control their emotions and pitch in big moments. For the more experienced ones, he acted as an extra set of eyes, helping them break down what went wrong.

Oberg was also used as a scout before the MLB draft, checking out a local high school pitcher, and a representative of the organization at community events, including the unveiling of a new local field. When he was allowed to, he hopped in during batting practice, standing in as an extra coach in the infield.

“He’s the kind of guy that is trying to help in any way he can,” Trevor Story said after a long grounder session, with Oberg standing in as his second baseman.

Oberg was cleared to play catch in May with a trainer, but then advised to stick to just running and walking. He’s back home now for the offseason, with plans to meet with doctors to figure out next steps. Playing baseball isn’t off the table quite yet, but he knows he needs to prioritize his health.

One thing is definite though: he plans to stay in the game, whether it's in the front office, as a scout, coach or anything else in the sport he’s loved since he was a little kid.

“Playing is always on the back of my mind,” he said. “I certainly would have loved to be out there. In my downtime, it’s been nice to get a more well-rounded view.”

The Rockies signaled to the bullpen for their new pitching coach, promoting Darryl Scott to the role after Steve Foster stepped down.