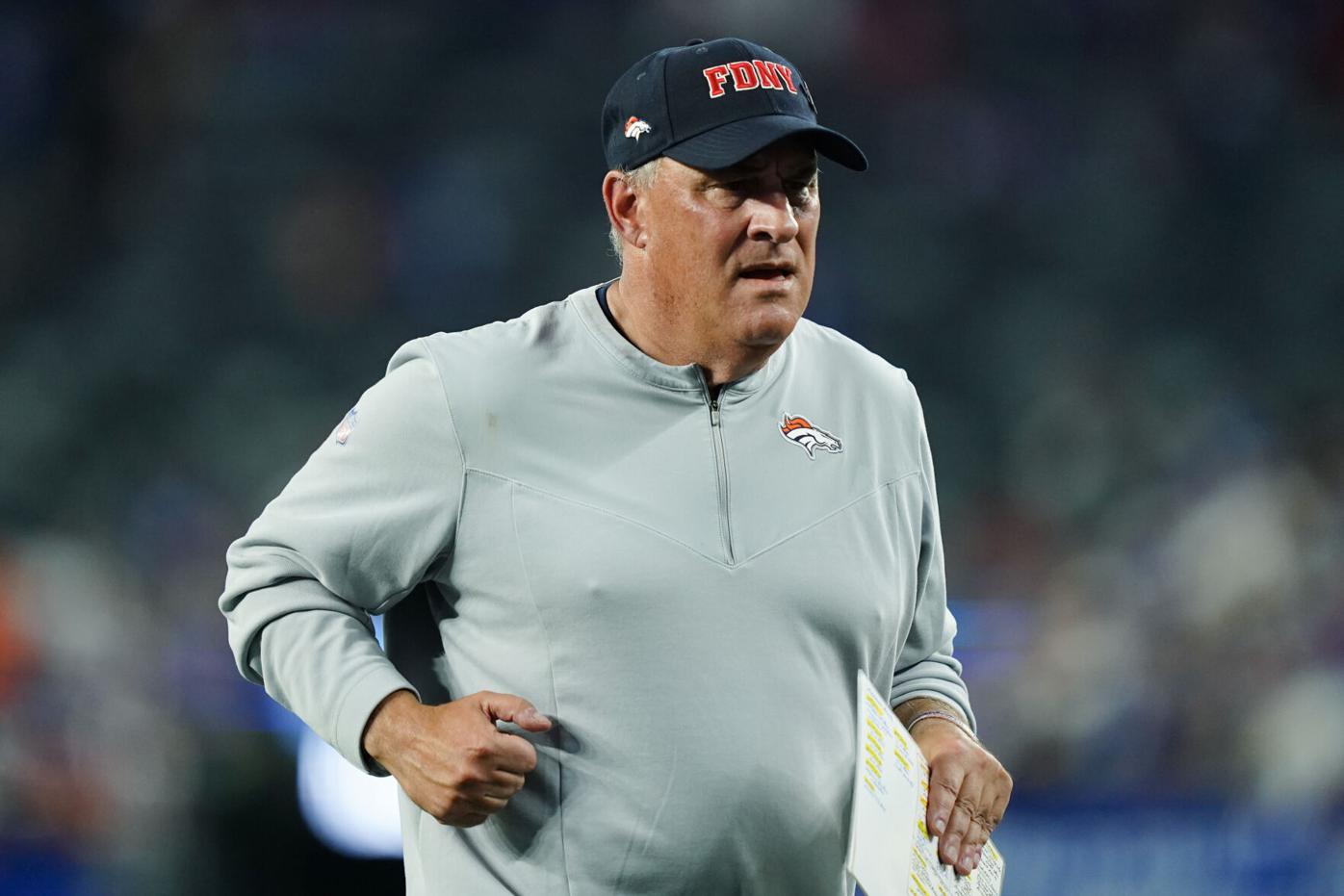 Broncos coach Vic Fangio leaves the field after a game Sept. 12 against the Giants in East Rutherford, N.J. 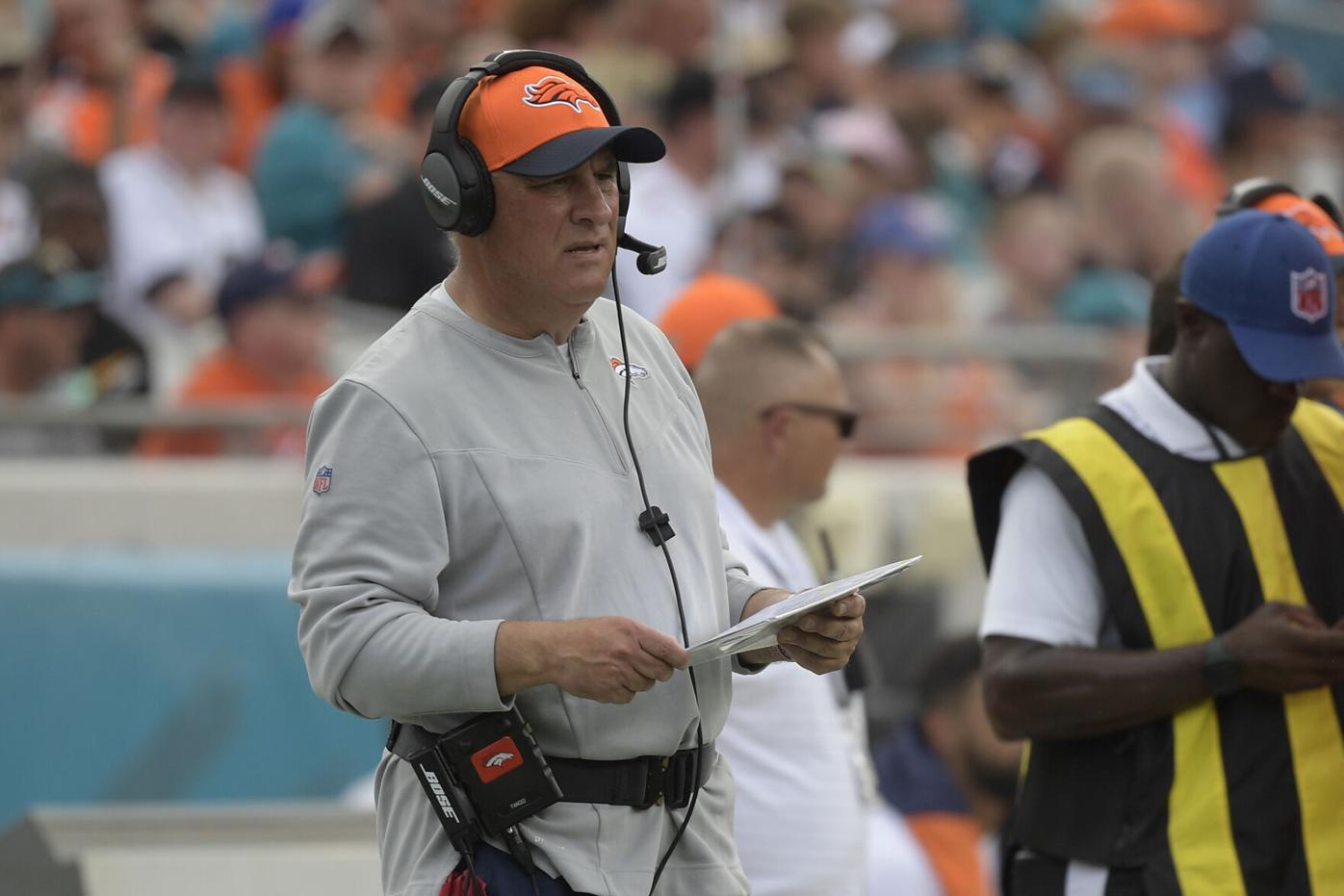 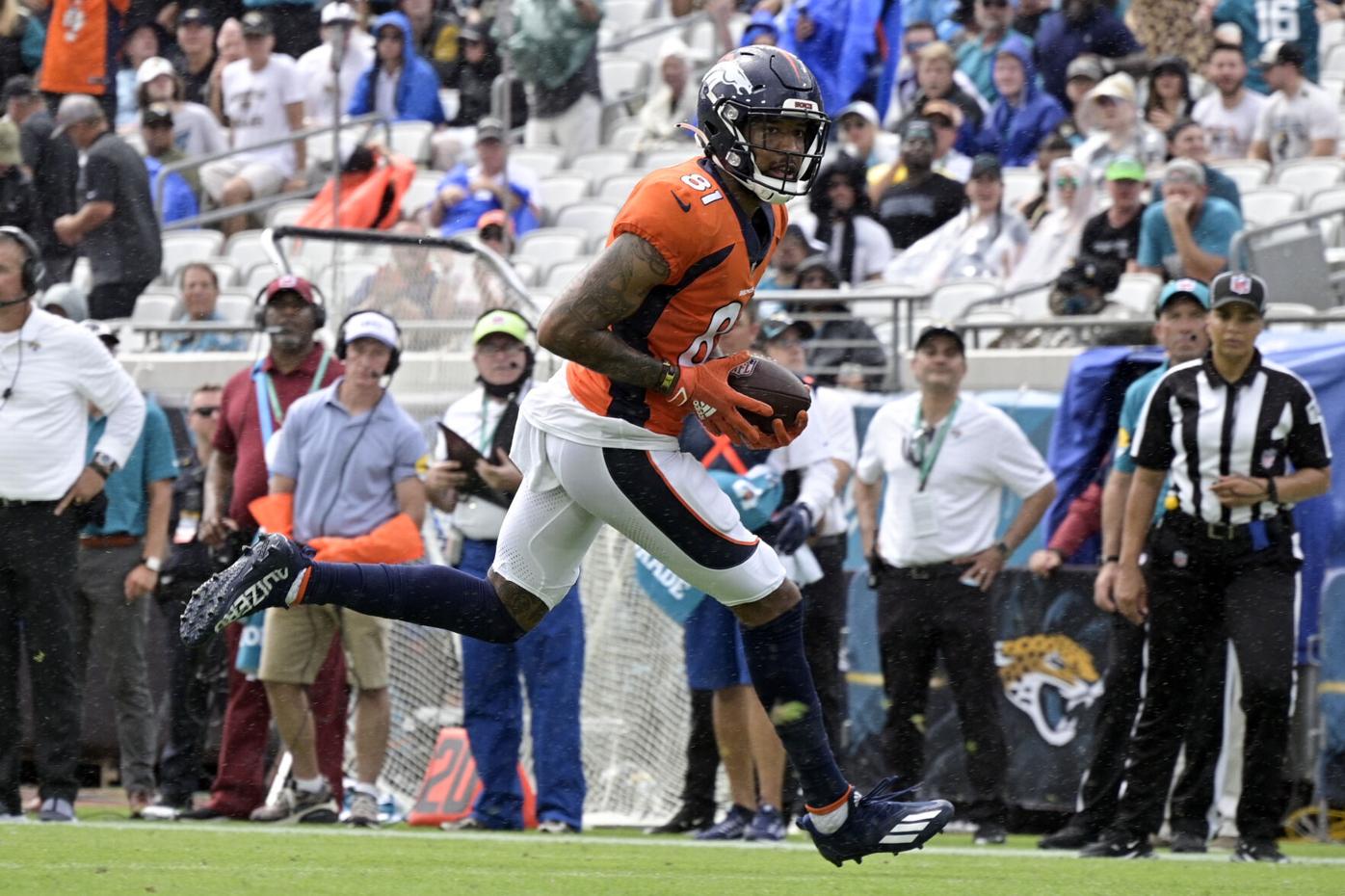 Denver Broncos wide receiver Tim Patrick (81) scores a touchdown on a 12-yard pass play against the Jacksonville Jaguars during the first half of an NFL game, Sunday, Sept. 19, 2021, in Jacksonville, Fla. (AP Photo/Phelan M. Ebenhack) 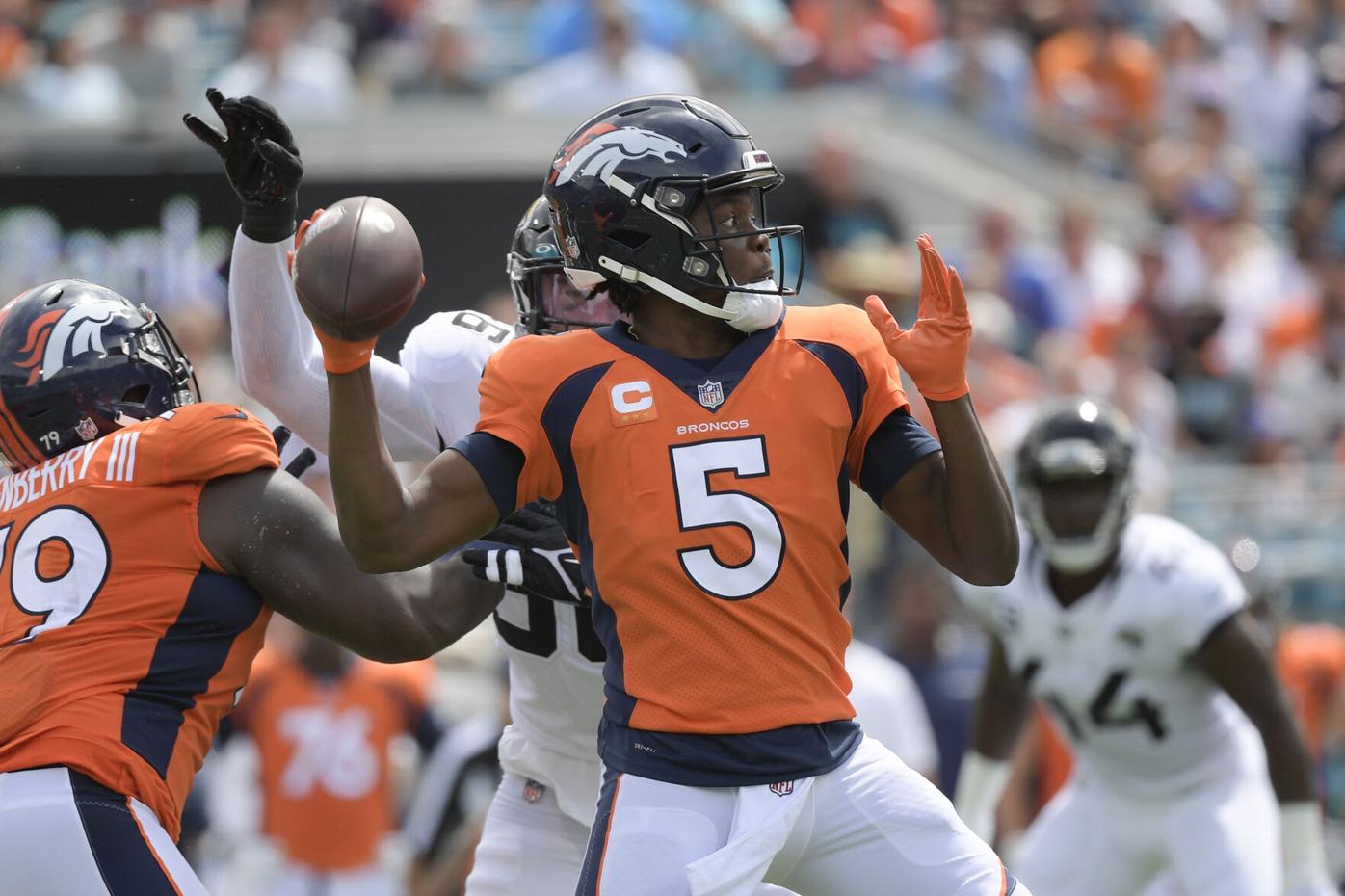 Denver Broncos quarterback Teddy Bridgewater (5) throws a pass against the Jacksonville Jaguars during the first half of an NFL game, Sunday, Sept. 19, 2021, in Jacksonville, Fla. (AP Photo/Phelan M. Ebenhack) 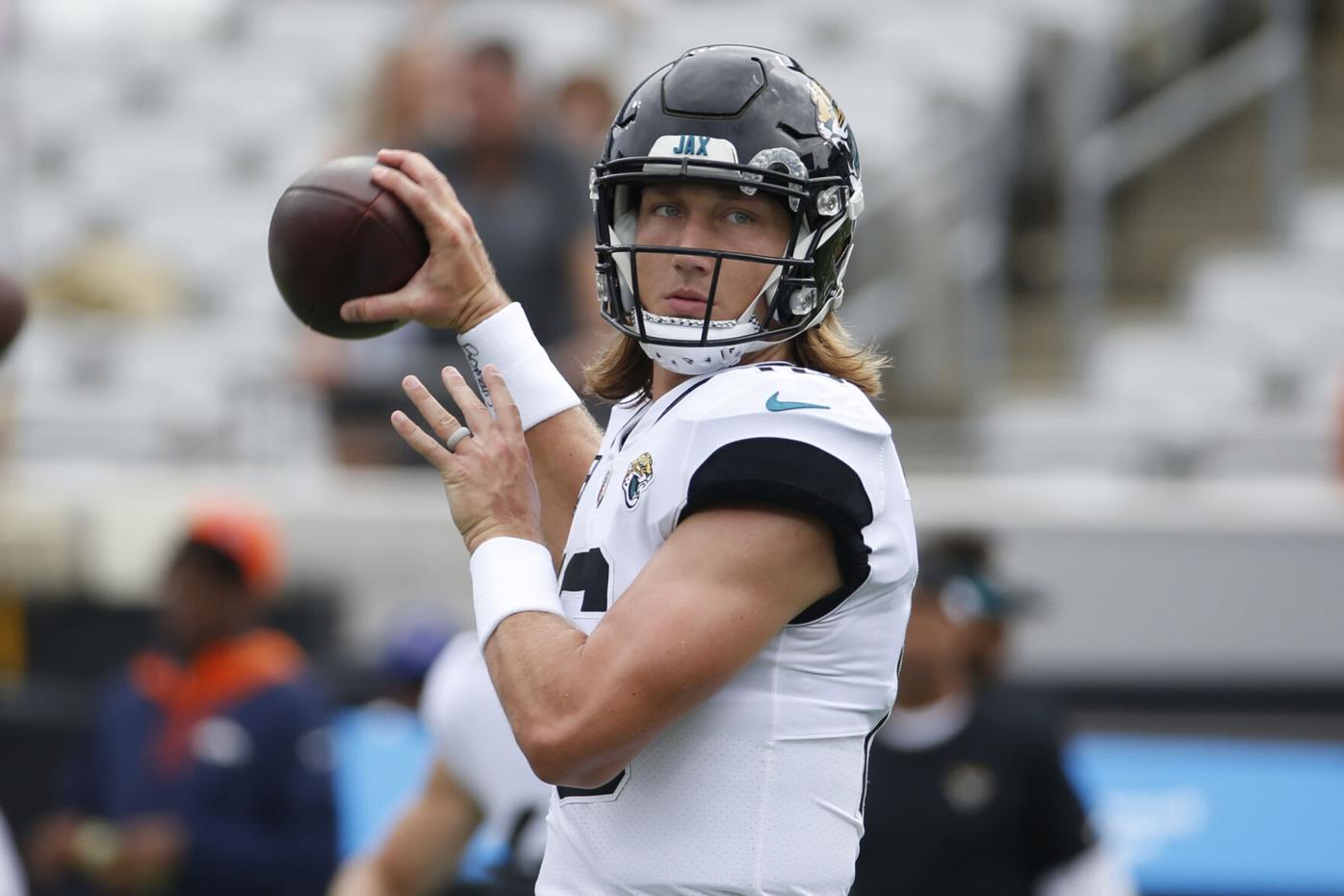 Broncos coach Vic Fangio leaves the field after a game Sept. 12 against the Giants in East Rutherford, N.J.

Denver Broncos wide receiver Tim Patrick (81) scores a touchdown on a 12-yard pass play against the Jacksonville Jaguars during the first half of an NFL game, Sunday, Sept. 19, 2021, in Jacksonville, Fla. (AP Photo/Phelan M. Ebenhack)

Denver Broncos quarterback Teddy Bridgewater (5) throws a pass against the Jacksonville Jaguars during the first half of an NFL game, Sunday, Sept. 19, 2021, in Jacksonville, Fla. (AP Photo/Phelan M. Ebenhack)

This fresh Fangio philosophy is faultless.

He and the Broncos are undefeated for the first season in three after a 23-13 victory over the Jaguars on Sunday.

The Broncos’ coach used to be more conservative on the football field than Calvin Coolidge was in the White House. Now, Vic Fangio has transformed into a Mississippi riverboat gambler in the rowdy tradition of Samuel Clemens.

What suddenly changed for the ol’ defensive ball coach? The Broncos are throwing long and going for it on fourth downs.

In the three exhibitions Vic The Stick-In-The-Grass started calling for his Broncos to be aggressive on fourth down — in their own terrain, during odd situations when a field goal was the safe selection and even when the offense was 4, 5, 8 yards away from a first down.

The unwashed masses and the guys in the huddle reasoned that Fangio was tinkering before the real season began, then would return to sending punter Sam Martin or kicker Brandon McManus out on every fourth-and-whatever.

He expressed that the experiment on fourth down was “a gut feeling.’’

Defense-oriented coaches born in the simple times of the 1950s preferred to not take chances. Some of them, like Gen. Robert Neyland at Tennessee, regularly would punt on third down. Lou Saban, a former Broncos coach, habitually would punt on fourth down and hope he’d get possession again soon. Saban even played for a tie against the Dolphins in the 1971 opener, and that act would get him fired during the season.

Fangio has been an “old school’’ guy.

In his first year as a coach in Denver, Fangio tried to make first downs on fourth downs 16 times.

Last season the Broncos were 32nd (last) in the NFL with just 15 attempts and four conversions (only a 73.3 percent failure rate).

Fangio trusted his defense way more than the offense; he was striving to keep games close late, and he wouldn’t trade a sure thing for romance. He obviously didn’t have a lot of faith in Drew Lock and the other quarterbacks he had to throw into games. Perhaps Vic wasn’t certain that his two offensive coordinators in 2019-20 would devise an efficacious fourth-down play.

So, what’s new this season? Vic has rejected punts and field goals five times in two games. The Broncos are No. 1 in the league with a success rate of 100 percent on fourth down and are 2-0, too.

Forward with the future, Fangio.

Kevin Kelly, a high school coach in Arkansas for 18 years, never punted. He won nine state championships following the advice of an economics professor at Cal-Berkeley who asserted teams should elect to run a play on fourth down at all times when the distance was fewer than 5 yards.

Kelly was hired by Presbyterian College this year. His team won the first two games 84-13 and 68-3 and set records using his formula. It doesn’t always work, though. The Blue Hose lost 72-0 Saturday.

Nevertheless, Fangio is new school with his fourth-down attitude. The coach clearly has more belief in Teddy Bridgewater as the Broncos’ quarterback in fourth-down circumstances and as a short-, medium- and long-distance passer, and more confidence in the offensive line, the wide receivers (especially Tim Patrick and Courtland Sutton), the tight ends (Noah Fant and Albert Okwuegbunam) and running backs Melvin Gordon and, particularly, rookie Javonte Williams.

In the opener against the Giants Vic chose to go on fourth-and-3 and, yes, fourth and 7, and both resulted in complete passes — one for a first down, the other for a touchdown to Albert Oh!

Then, Sunday in the seventh triumph in 14 games vs. the Jaguars, the Broncos converted three fourth-down opportunities, with Bridgewater busting ahead for a first down once on fourth-and-1.

Fourth downs haven’t made the difference in the first two victories in three Septembers for Fangio, but they did keep drives alive and got the Broncos closer to touchdowns and field goals. The players are excited that the coach has conviction in the offense.

And, of course, all football fans and media chumps want a coach to go on fourth down, no matter the yard line.

Fourth down is becoming just another positive play for the Broncos, as the Giants and the Jaguars learned.

The Broncos started 2-0 for the 25th time since the AFL-NFL merger with a 23-13 victory at Jacksonville on Sunday, following a 27-13 win at the New York Giants in Week 1.