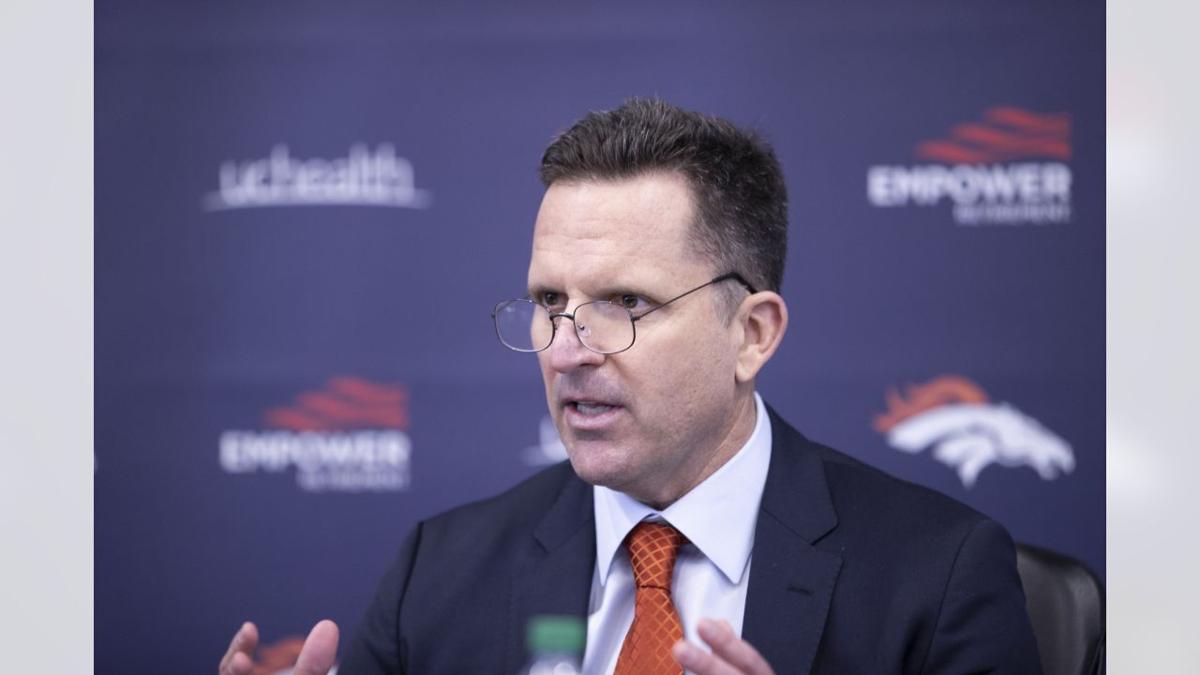 Broncos GM George Paton speaks to the media over Zoom at UCHealth Training Center in Centennial on Jan. 19. Photo courtesy of the Broncos. 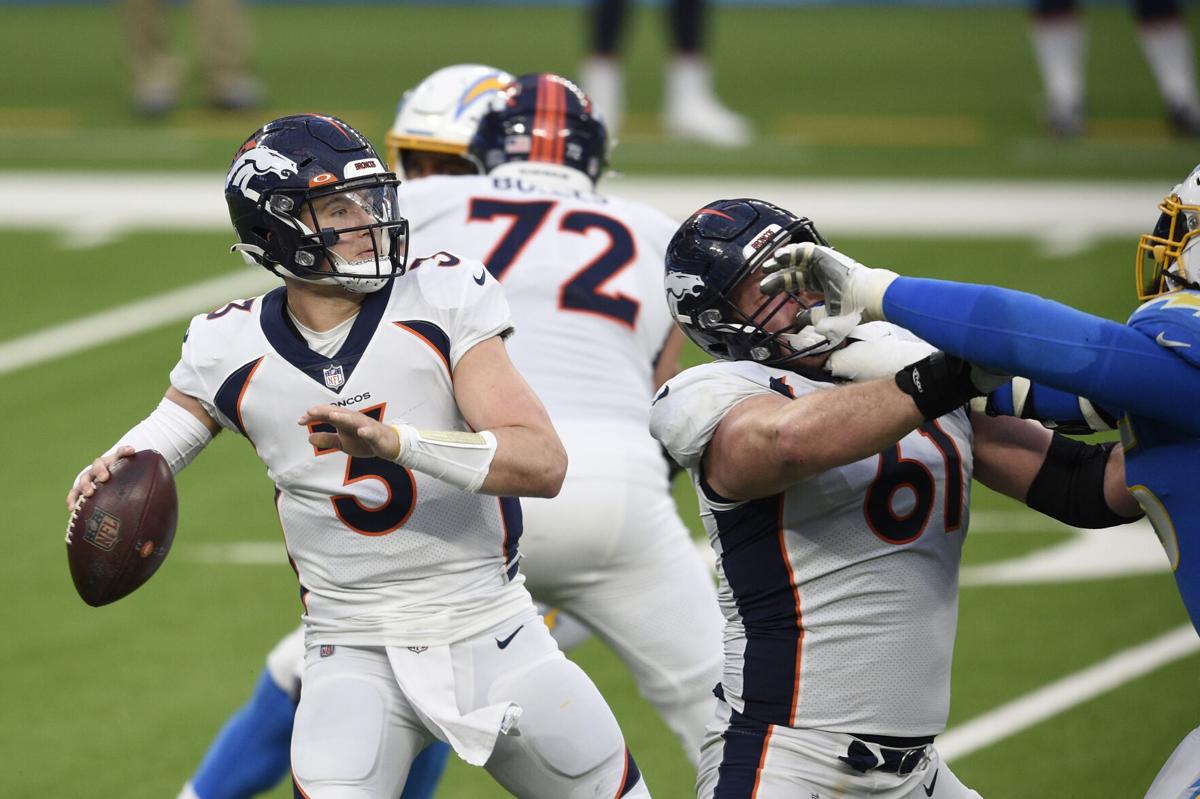 Denver Broncos quarterback Drew Lock (3) prepares to throw against the Los Angeles Chargers during the second half Sunday, Dec. 28, 2020 in Inglewood, Calif. The Chargers beat the Broncos 19-16.

Broncos GM George Paton speaks to the media over Zoom at UCHealth Training Center in Centennial on Jan. 19. Photo courtesy of the Broncos.

Denver Broncos quarterback Drew Lock (3) prepares to throw against the Los Angeles Chargers during the second half Sunday, Dec. 28, 2020 in Inglewood, Calif. The Chargers beat the Broncos 19-16.

The G-Man is on the clock.

George Paton has approximately 35,000 minutes before the Broncos are scheduled to pick No. 9 in the NFL draft April 29.

Time is passing for Paton.

But who in time will be passing for the Broncos?

The list has become shorter than Benjamin Franklin’s 13 virtues and Adrian Messenger’s, but not clearer.

Paton probably isn’t even telling his wife, Barbara, who he believes will be the Broncos’ quarterback, although the general manager asserts that he has a plan. An A-List exists in Paton’s mind, but the QB list must include a B-List (Bridgewater), a T-List (Trevor and Trey), a Z-List (Zach), a J-List (Justin and Jones) and, of course, a D-List (Drew, Darnold, Deshaun).

The Broncos’ Brainteaser: Do they deal or defer? Can and will the Broncos ascend to fourth, fifth, sixth or seventh in the draft, or do they descend to 12, 14, 16 or 18 in the first round?

If they remain at No. 9, Paton has stated that he and his high-level advisers will take the No. 1 player on the Broncos’ Big Board — no matter the position, and “quarterback will be in play.’’

Of the top five, only Mac Jones might be available for the Broncos at ninth. But he could be selected by the 49ers or drop to 15th with the Patriots.

Urban Meyer, the Jaguars’ new coach, all but has conceded that Trevor Lawrence will be the choice. Despite his love for the Florida Gators, Meyer isn’t imprudent enough to take Kyle Trask, one of three also-rans in the quarterback derby. The other two that may be around in the second and third rounds are Kellen Mond of Texas A&M and Davis Mills of Stanford — who could have been picked by John Elway if he were still in charge of the Broncos’ draft. Kidding. I think.

The New York Jets will take Zach Wilson and suddenly send Sam Darnold to somebody who offers a second-rounder. Would the Broncos be “in play’’ here?

Darnold has started 38 games and won 13. Drew Lock has started 18 games and won 8. Sam has completed 59.8 percent of his passes for 45 touchdowns and 39 interceptions. Drew has completed 59.1 percent for 23 and 18. Is Darnold an improvement over Lock? Was he a victim playing under Adam Gase, who was effective in Denver as the offensive coordinator — with Peyton Manning. Neither of them is he. Has Lock been depreciated and undervalued by injuries and different coordinators, and the lack of an offseason in a pandemic, during his two seasons? Nobody knows.

Would the Broncos rather have Lock or Darnold?

It’s possible that Paton will make the major move to a higher spot (perhaps No. 5, possessed by the Bengals) and hope the four teams ahead all don’t pick quarterbacks. But they will. Atlanta wants a young QB to back up Matt Ryan for a couple of seasons. The Broncos would have to offer the Falcons a trade nearly the same as the 49ers made with the Dolphins — exchanging the No. 9 and first-round picks in 2022 and ’23, and maybe a fourth, for No. 4. Is the GM willing?

The fifth pick would cost the Broncos their first, a third, a fourth and one of their sevenths. Every Broncos backer would crave that trade if Fields or Lance were available at five. Paton certainly would agree.

The Broncos have to worry about the Panthers attempting to advance to Nos. 4 or 5.

Yet, Paton could decide to trade the ninth to his old friends in Minnesota for the 14th and choose between inside linebackers Micah Parsons of Penn State and Jeremiah Owusu-Koramoah of Notre Dame. Paton has traveled to see each.

After the draft Paton can trade for Teddy Bridgewater, who the GM was involved with selecting in the first round for the Vikings, or the Jags’ Gardner Minshew.

The elephant in the league is Deshaun Watson. Now, the Broncos wouldn’t have to give up the 58 14ers in Colorado.

Whatever Paton determines, his time in April soon will be of the essence.

Woody Paige: No Beanie Babies for Denver's second MLB All-Star Game; how about the humidor?

Woody Paige writes: The Midsummer Midseason Night’s Dream will play out in Denver again. No Beanie Babies this time. Turn off the humidor for the Home Run Derby.